Unmanned Aerial Vehicles (UAVs) or simple knowns as Drone are enemies encountered in F.E.A.R. First Encounter Assault Recon and F.E.A.R. Perseus Mandate. It is unknown if the UAVs are for sale to buyers, or if they are an exclusive defense product.

Unmanned Aerial Vehicles are rarely encountered, floating mechanisms designed by Armacham Technology Corporation. UAVs remain airborne via small jets of unknown operation that tip the three extensions radiating from their centers. Providing high versatility, these jets allow UAVs to seamlessly navigate corridors, strafe targets, and even use windows as improvised entry and exit points. UAVs are armed with single, rapid firing laser emitters built into their central masses that fire high-energy laser bolts with moderate accuracy. Relatively vulnerable to gunfire, UAVs are not particularly dangerous alone. However, they almost always remain in groups, allowing them to quickly surround their targets with ease. While some UAVs actively ambush the Point Man, smashing through exterior windows, it appears that others remain dormant until "awakened" by external stimuli. In these instances, UAVs produce an abrupt, sharp sound reminiscent of a gunshot and emit a small burst of electricity before entering combat.

It is unknown what faction, if any, UAVs belong to. No evidence is ever shown that suggests Replica forces have commandeered them, yet it is also never made clear whether ATC Security has any control over them, direct or indirect. Furthermore, since UAVs are only observed when combating the Point Man, it is not clear who else they consider hostile. However, given the fact that several UAVs never attack Norton Mapes at the entrance of the Vault, it's likely that they do not attack ATC employees.

UAVs are encountered on two general occasions in F.E.A.R. They first appear late in the Point Man's journey through the Armacham Technology Corporation Headquarters. They also make several appearances at the Rammelmeier Industrial Compound. This implies that ATC may have indeed implemented UAVs as a security force working alongside standard security guards.

Blueprint schematics of UAVs can be seen strewn about on tables and hung on walls throughout certain areas in the ATC headquarters, particularly in research labs. These are often present along with other various sheets of data that may be related to them.

A total of 15 are encountered in the entire game.

UAVs return in F.E.A.R. Perseus Mandate, although not in the campaign itself. The UAVs appear in the third bonus mission, "Sprint." 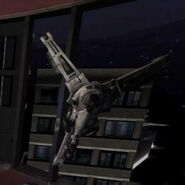 A UAV in Armacham Headquarters.

A UAV Blueprint, found in a lab of the ATC Headquarters.

Unmanned Aerial Vehicles inside Orgin Facility.
Add a photo to this gallery

Retrieved from "https://fear.fandom.com/wiki/Unmanned_Aerial_Vehicle?oldid=44263"
Community content is available under CC-BY-SA unless otherwise noted.