The Sergeant is the protagonist of F.E.A.R. Perseus Mandate. He is not considered to be part of the official canon of the F.E.A.R. series.

No background information is given about the Sergeant, other than the fact that he is the third member of F.E.A.R.'s secondary team. He seems to possess the same Slow-Mo ability as the Point Man, however, this is never commented on or explained in Perseus Mandate. Towards the end of the game, Paxton Fettel implies that he has been expecting the Sergeant's arrival, and remarks that the Sergeant reminds him of his brother, the Point Man. However, Fettel ultimately tells the Sergeant that what occurred between himself and the Point Man is "none of his affair" and warns him not to interfere.

During the course of Perseus Mandate, the Sergeant is sent into Fairport to help contain the developing situation involving the city being overrun by Paxton Fettel and Alma Wade, two powerful Psionics with a grudge against Armacham Technology Corporation. The Sergeant is confronted by Replica Forces under the command of Fettel, as well as a group known as the Nightcrawlers, sent by the mysterious Senator to obtain samples of Fettel's and Alma's DNA. While battling his way through numerous Armacham-owned facilities, the Sergeant is repeatedly confronted by apparitions of Alma Wade, both in her adult and child forms. The Sergeant is able to stop the Nightcrawlers from obtaining Alma's DNA, however, he is unable to stop a Nightcrawler Elite from bringing Fettel's DNA to the Senator. With his job in Fairport done, the Sergeant boards a UH-60 Blackhawk Helicopter, and is flown safely from the island. 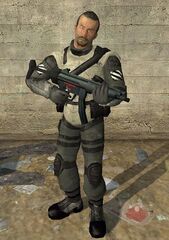