A creature born from Alma's mind. A representation of fear and hatred.

Scavengers are creatures created by Alma Wade. They are said to be created due to her bad childhood memories, and appear in F.E.A.R. 3.

Buried deep in Alma's mind are the memories of her time in the Vault. Her only human contact was the Armacham Technology Corporation scientists and doctors who came to take more "samples" for their rigorous testing protocols. They would poke and scrape at her, gathering samples for research, and then leave her alone in the Vault. These harsh memories make up the dismal corner of Alma's mind from which the Scavengers spring. As Alma's contractions increase in intensity, the Scavengers, along with other fragments of Alma's tortured psyche, begin to bleed over into the real world.

The Scavengers are as indiscriminate as the torturing madmen that inspired them. They have an unmatched hunger and aggression and are highly intelligent and disciplined, working together to ruthlessly consume their prey. As soon as one Scavenger senses prey, it calls on the rest to join in the attack. Their method of attack consists of scratching and lunging to bite. Flames start to appear on their bodies as they take damage, indicating how much health they have left.

Being rogue horrors of Alma's mind, they attack both the player and ATC forces. Scavengers are also controlled by the Creep, and they and the Creep are the only enemies who can't be possessed by Paxton Fettel.

The Scavengers are only encountered in Intervals 06 and 07. In both Intervals, in certain sections, over 50 Scavengers will spawn, though not all at once. They are also encountered in the maps for the multiplayer mode Contractions. A special, dark blue colored Scavenger also appears in Soul King if the player attacks Alma or looks at her for too long.

A Scavenger in the live action trailer.

Scavengers on the bridge.

1st version of the Scavenger.

Final version of the Scavenger. 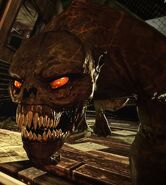 A close-up of a Scavenger.

Bloody Scavenger footprints in the Airport.
Add a photo to this gallery
Retrieved from "https://fear.fandom.com/wiki/Scavenger?oldid=41614"
Community content is available under CC-BY-SA unless otherwise noted.