"We may have a problem, and I don't like problems!
-Richard Vanek, on his eternal struggle with problems."
—{{{2}}}

Colonel Richard Vanek is a secondary antagonist in F.E.A.R. 2: Project Origin. He is associated with four projects as the head of security: Paragon, Origin, Perseus, and Harbinger. His voice actor is unknown.

Richard Vanek is a former Marine Force Recon Colonel and is the Commander of Armacham Technology Corporation forces.

Being a former Marine officer, Vanek attempts to carry out his mercenary duties with military perfection. He is extremely temperamental, oftentimes barking out unintentionally comical comments to the player and to his own men. He is also prone to curse in diverse selections, which is somewhat understandable since only one man (Michael Becket) eliminates the majority of his men without too much trouble. However, his Black Ops units are considerably better trained than the security guards, whom he commands with powerful authority. Some of his Lieutenants (Samuels, Mendez, etc.) are mentioned, implying that the Black Ops forces are more organized than the regular security guards. He has high level access to almost every project in Armacham Technology Corporation's history, and finds the Replica project extremely disgusting.

He is very "commanding" of his Black Ops, does not tolerate failure, and openly vents his frustration when things go wrong for him. Vanek also seems to be feared as well, as Genevieve Aristide desperately sends a distress call that if she is found by Vanek, she would likely be killed. However, according to the radio conversation between Vanek and the Black Ops Light Soldiers, they want to capture Genevieve alive, probably due to the order of the ATC's Board of Directors.

He is first heard in Valkyrie Tower. Vanek is not encountered there but his radio commands can be heard and issues his men to eliminate any threats to their operation immediately.

The player first meets Vanek during an encounter in the T.A.C. Lab, where the mercenary commander orders Lieutenant Samuels and his men to dispose of Michael Becket. Later on, he appears multiple times over the course of the game, typically taunting the player and ordering the men under his control to attack. After his successful demolition of the Harbinger Facility, Vanek uses an Abomination with weak telepathic ability to control the Replica Soldiers, and then leaves the clones with Becket, assured that they will kill the Delta Force operative. Later on, Snake Fist reveals that Vanek and the remaining squads of the ATC Black Ops have cornered himself and Genevieve Aristide in Wade Elementary School. Becket pursues Vanek to the secret labs below the school, where he engages the Colonel in hand-to-hand combat. The two struggle over Vanek's shotgun, but Becket forces the muzzle under Vanek's chin and blows his head off.

After Vanek's death, the Black Ops are not faced again for the rest of the game. 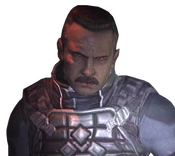 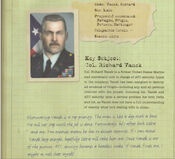 A portrait of Richard Vanek.