Blue and white uniform with black faceplate helmet; with the code T114 printed on armor vests.

Replica Tactical Soldiers are a Replica Soldier unit in the F.E.A.R. series. They wear blue and white uniforms with black faceplate helmets, and have the code "T114" printed on their armor vests.

Replica Tactical Soldiers appear in the F.E.A.R. opening cut scene as Paxton Fettel's personal bodyguards, and the Point Man occasionally fights them inside Armacham Technology Corporation Headquarters. They're usually found guarding hostages, such as Aldus Bishop or Alice Wade. Fittingly, these troopers are quite rare, and the player will encounter them only a few times within the game. They are the best armored replica soldiers, other than the Replica Elite Soldiers and Replica Laser Elite Soldiers, but the difference isn't too dramatic.

Replica Tactical Soldiers are much more common in F.E.A.R. Extraction Point, making up the majority of the enemies. 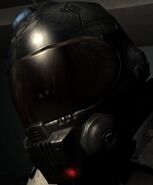 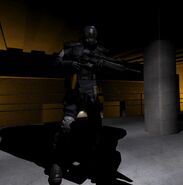 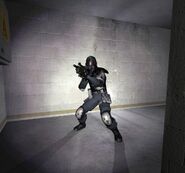 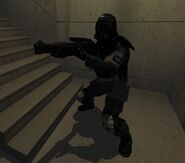 Retrieved from "https://fear.fandom.com/wiki/Replica_Tactical_Soldiers?oldid=43585"
Community content is available under CC-BY-SA unless otherwise noted.