Replica Recon Soldiers are the weakest type of Replica Soldier in the F.E.A.R. series, as well as being the most common. They are commonly encountered in the first few levels of F.E.A.R. and its expansions; Extraction Point and Perseus Mandate.

Replica Recon Soldiers are the first Replicas the Point Man engages in combat and they're the first Replicas to be seen, appearing throughout the South River Wastewater Treatment Plant. They are significantly weaker than the other Replica soldiers found later in the game, able to take much less damage and having slightly worse aim. They do not use special weapons, such as the 10mm HV Penetrator or ASP Rifle. Notably, a number of them are seen wearing the red night-vision goggles typically seen on the Fatigues Replica Soldiers.

Replica Recon Soldiers also appear in F.E.A.R.: Extraction Point and F.E.A.R.: Perseus Mandate. Being the weakest Replica unit, they are once again present exclusively during the beginning missions. But even with standard equipment, they can be lethal on higher difficulties, due to the shortage of the player's arsenal and their superiority in numbers.

Replica Recon Soldier's about to execute the ATC guards

Recon and Tactical Replicas are activated

A Recon Replica fireteam on the patrol for enemy targets 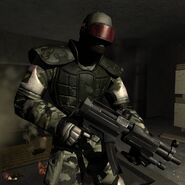 A Recon Replica on guard, armed with a G2A2 Assault Rifle

Recon units deployed to intercept the F.E.A.R. Point Man's assault against their comrades 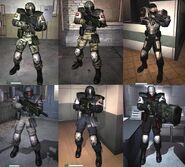 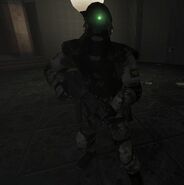