The Replica Laser Elite Soldiers are so-named because they are the only enemy in Extraction Point that carry the Type-12 Laser Carbines into combat. However, only five Laser Elites throughout the game are actually equipped with a Type-12 Laser Carbine. Most carry standard firearms, such as the G2A2 Assault Rifles or VK-12 Combat Shotguns.

Throughout the expansion, the encounters with Laser Elites are quite rare, as they act as special commandos attached to other Replica units. However, they are the only Replicas present within Auburn Hospital, along with few Replica Heavy Armors and Heavy Riot Armors. At one point in the Auburn Memorial Hospital, Laser Elites are seen battling hordes of Shades to futile effect, noting the fact that although they are the most powerful infantries the Replica Forces have, they still are little to no match against Alma's Apparitions.

Replica Laser Elite Soldiers remain the toughest, most heavily armored regular enemy soldiers the player will face in Perseus Mandate. Fortunately, their numbers are scarce in this expansion. In Perseus Mandate, Laser Elites are equipped with G2A2 Assault Rifles, with none of them carrying the Type-12 Laser Carbines they are famous for. Only in Perseus Mandate's bonus levels are where they make use of their laser carbines once again, though Laser Troopers in the first bonus mission also carry VES Advanced Rifles and one in the second bonus mission carries a Type-7 Particle Weapon. 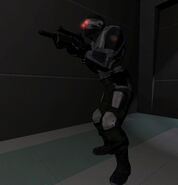 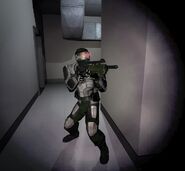 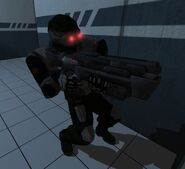 Add a photo to this gallery
Retrieved from "https://fear.fandom.com/wiki/Replica_Laser_Elite_Soldiers?oldid=42003"
Community content is available under CC-BY-SA unless otherwise noted.