These Replicas act as shock troopers to the standard Replica squads and usually support them with automatic shotguns. They have significantly more health than standard Replicas and are more dangerous if they are in close proximity due to their shotguns. They also have higher armor than the standard Replica Troopers. Oftentimes, the player will encounter a squad of regular soldiers along with at least one of them, and it is imperative that the player kill these heavy armors first, due to the possible danger their shotguns pose. Many of them carry rocket launchers, but only when the player is able to control the Elite Powered Armor. In the demo of the game, they carried the SHO Series-3 Combat Shotguns instead of the automatic ones. They were originally thought to be the successors to the Replica Heavy Armor, but there is an entirely different unit for that. Nevertheless, the heavy soldiers possess the deep voice that the prequel's heavy armors made whenever killed.

Only two are encountered in Reborn: one holds an Andra FD-99 while the other holds the Andra SR5 Missile Launcher. Foxtrot 813 only gets to fight the one holding the submachinegun, making him much easier to fight then before. The one with the rocket is scripted to shoot down 813's elevator and will never be seen again.

Concept art of the Heavy Trooper. 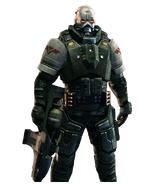 Replica Heavy Trooper Render
Add a photo to this gallery
Retrieved from "https://fear.fandom.com/wiki/Replica_Heavy_Trooper_(Variant_VII)?oldid=43951"
Community content is available under CC-BY-SA unless otherwise noted.