Replica Fatigues Soldiers are a Replica unit that wears a solid grey uniform and a grey balaclava with red Night Vision goggles.

Replica Fatigues Soldiers are Replicas that show up towards the end of the level in the South River Wastewater Treatment Plant, and are also fought mainly during the first half of the Armacham Technology Corporation Headquarters level (although they make occasional appearances in the later half as well). The red glow from their Night Vision goggles makes it easy to spot them from a distance or in the dark.

Replica Fatigues Soldiers are faced in the later stages of F.E.A.R. Extraction Point.

Replica Fatigues Soldiers appear in the Bonus levels of Perseus Mandate, but not seen in the storyline. They sometimes wear a gas mask (the same as that worn by Replica Urban Soldiers) or green night goggles and carry the Type-7 Particle Weapon. These can also be Replica Snipers, as they have the same uniform and health/armor as the Fatigues and are extremely hard to tell the differentiate. 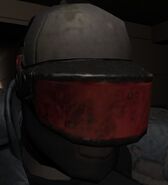 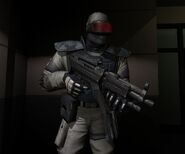 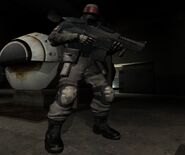 Add a photo to this gallery
F.E.A.R. Perseus Mandate

Add a photo to this gallery
Retrieved from "https://fear.fandom.com/wiki/Replica_Fatigues_Soldier?oldid=44209"
Community content is available under CC-BY-SA unless otherwise noted.