Replica Assassins are rarely encountered stealth soldiers created by Armacham Technology Corporation as part of the Icarus Project before it was shut down. They are the first variant of the Replicas.

Being specially bio-engineered Replicas, Replica Assassins possess amazing speed and agility. They are also equipped with cloaking devices that allow them to become nearly invisible, resulting in a visual effect that resembles a distortion of air that covers their shape. The difference is even harder to notice if the players have their flashlight off.

Assassins can attach themselves to walls, and tend to give away their presence with a visual distortion effect and a low-volume but high-pitch electronic buzzing similar to the sound of stretching rubber. While they are extremely fast, they rely on relatively weak melee attacks rather than weapons due to the fact that their stealth technology only cloaks itself and anything inside of it and thus items such as grenades or firearms would not be concealed. They fight with hit-and-run tactics, striking first then retreating into other rooms, onto walls or ceilings, or to higher ground. They do not speak, but produce a faint, high-pitched electrical sound when killed, along with short harmless bursts of electricity.

The Point Man first encounters Assassins in the South River Wastewater Treatment Plant, seeing them only briefly before they run away. Assassins only attack once the Point Man has infiltrated the Armacham Technology Corporation Headquarters.

Replica Assassins are encountered again in F.E.A.R. Extraction Point and F.E.A.R. Perseus Mandate, albeit not as frequently. Mostly, the supernatural equivalent Shades take over.

Assassins in these games, to make up for this, are encountered in bigger groups than they would in the first game – often as many as five can be encountered in a single area.

Replica Assassins also appear in F.E.A.R. 2: Project Origin, where they are able to use a special attack to stun enemies. As mentioned in the Icarus Project, their bones have been replaced, which can be seen if the player burns their flesh away with the Armacham Type-12 Pulse Weapon. The cloaking device used by them seems to alter light far differently, and not nearly as effectively as in F.E.A.R., occasionally spurting out in blooms of color. Their first appearance, where they sneaks up on Terry Halford and quickly decapitates him. Since the new Assassins have an electric attack, it is not known whether these are a different variant of Assassins from the first game, although it is more likely to be just an upgraded design.

A total of 24 Assassins are fought in the game; 5 from Snake Fist, 7 from Keegan, and 12 from Approach.

Note that these numbers include some that might run away, which will never be see again if they aren't killed right away. There are 2 from Approach that will usually run away and vanish if they aren't killed fast enough; the first and last ones out of the 12 in that level, some of the Assassin encounters in Approach can be avoided by staying on the main path. The final Assassin seen in Keegan is not killable.

In F.E.A.R. 2: Reborn, their encounter is much frequency, especially from Interval 04 - Guidance pairing with REV6 Powered Armor making it a deadly face off in the level.

While Replica Assassins are not featured in the game, Scavengers replaced them in technical terms, as the monstrosities possess agility and strength comparable to that of Assassins, though they do not possess stealth or high-technology, their speed and attack pattern are similar to the Assassins. It is most likely that all the Assassins have been killed or decided to leave Fairport, as they were never under anyone's control, and were merely exacting their own vengeance, as stated in the Armacham Field Guide.

An Assassin attacking the Point Man in the deleted scene.

Two Assassins, one cloaked and one visible.

Concept art of an Assassin, notice the firearm which was scrapped. 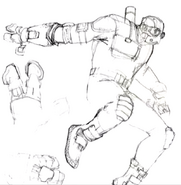 Early sketch of an Assassin.

Replica Assasin in the dim corridors of ATC HQ.

Replica Assasin in the dim office of ATC HQ.

Replica Assasin on the wall inside ATC HQ.

Michael Becket in combat with an Assassin in F.E.A.R. 2.

Replica Assassin sneaks to Becket, watch the right side of the bench.
Add a photo to this gallery
Retrieved from "https://fear.fandom.com/wiki/Replica_Assassin?oldid=44260"
Community content is available under CC-BY-SA unless otherwise noted.