A possessed human corpse that can control other dead bodies.

A Remnant is a type of enemy that appears in F.E.A.R. 2: Project Origin.

Remnants are normal people affected and effectively mutated by Alma Wade's psychic influence after the Origin Facility Explosion, guided only by their memories of who they were, and their former lives. These psychically mutated beings are no longer human. Approaching one too closely invokes a powerfully devastating and disorienting scream, serving as a warning for the chain of events a Remnant will begin.

Remnants are akin to puppeteers, and can take control of nearby enemy corpses, such as those of dead enemy soldiers of various factions, which will then seek out a weapon and attack whoever the Remnant wills them to. The Remnant itself has only its scream and a strong melee attack to defend itself, so the reanimated dead serve as bodyguards, although Remnants can take much more damage than most single enemies in the game. Remnant-controlled corpses are merely puppets on strings, controlled by the very will of the Remnant - killing the Remnant will result in the strings being cut, and the corpses will rest yet again.

There are three Remnants faced in the game: A man trying to hail a taxi, a piano teacher, and a school principal; each one a harder encounter than the last. While almost nothing is known about the first two Remnants, other than that the Wade Elementary School employed the piano teacher, intel in the game reveals the principal's last name was Saunders, and that he was in charge of the school's operations and was concerned with maintaining the illusion of the school. It is also revealed that he used to be a psychiatrist.

An intel found near the first Remnant says that Colonel Vanek wants his men to stay away from civilians, as they have lost contact with some squads after they reported seeing civilians acting strangely. This is an instance where Vanek's men have been influenced by the Remnant's mind control power and killed or taken over.

Two more of the Remnants are encountered by Foxtrot 813 during his journey to Paxton Fettel. The two do not perform any particular actions of their former life, merely being mindless monsters who stalk the player in the sewers. This is most likely related to Alma using every means at her disposal, including Remnants, to try and destroy Foxtrot 813. The first one encountered more or less acts the same as those seen in Project Origin, however, the second one is a bit tougher, due to Abominations appearing and attacking Foxtrot 813 as well. 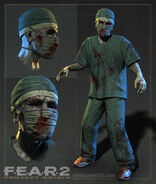 Concept art of a doctor Remnant.

Music teacher as a Remnant.

Close up to Principal Saunders Remnant.
Add a photo to this gallery 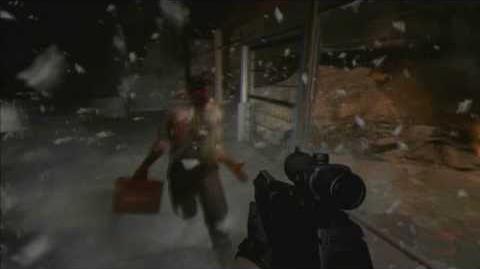 F.E.A.R. 2 Project Origin-Remnants
Remnants trailer.
Add a photo to this gallery
Retrieved from "https://fear.fandom.com/wiki/Remnant?oldid=40672"
Community content is available under CC-BY-SA unless otherwise noted.