The word psionic refers to any paranormal power of the mind or body and is a prevalent subject in the F.E.A.R. series. Psionic individuals are those whose minds are as deadly as any common weapon.

The origin of psionics and psychic abilities are unknown. The earliest documented case of psionics is Alma Wade, a severely troubled child with tremendous psychic powers who suffered nightmares and was attuned to the negative emotions of the people around her. Her father, Harlan Wade, noticed her powers not long after birth, and introduced her to Armacham Technology Corporation's experiments when she was three years old. Armacham tested Alma for every type of psychic power, and she passed all tests. At the age of five, Alma began to purposefully fail Armacham's tests. When she was six, she set fire to a lab in the Project Origin facility and began to psychically attack the scientists experimenting on her. The scientists began to suffer delusions, sudden mood changes, and vivid nightmares. When Armacham realized that the only thing stopping Alma from doing much worse things to the scientists was her young age, they devised a plan to keep her alive, but unable to psychically attack anyone.

At the age of seven, Alma was recruited into ATC's "Project Origin" with the aim of creating psychic individuals from a psychic forebearer: two days before her eighth birthday, in 1987, she was put into an induced coma and locked in the Vault, a spherical structure located deep inside the secret Origin Facility. During the project, Alma was impregnated twice with prototypes created from her own DNA mixed with that of the Origin researchers. She gave birth to a first prototype, Point Man, when she was 15 years old, and then a second, Paxton Fettel, when she was 16. Life support was removed from the Vault when Alma was 26, leading ATC to believe she was dead. According to Harlan Wade, her physical body died six days after the removal of life support, but apparently her psychic energy continued to linger long after her heart stopped, fueled by the hatred of her angry, rageful spirit.

Paxton Fettel was trained as a psychic commander in "Project Perseus", controlling the cloned, elite Replicas. However, after Alma synchronized her mind with her youngest son, an event referred to as the "Synchronicity Event," Fettel became homicidal and took command of the Replica prototypes, seizing control of the ATC headquarters in Fairport, Washington and killing all occupants. 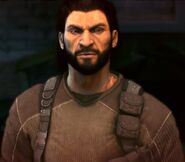