Phase Commanders are a type of cyborg enemy created by Armacham Technology Corporation seen in F.E.A.R. 3.

Phase Commanders lead the Armacham Forces into battle against the Point Man and Paxton Fettel. They are protected by thick armor with advanced shield technology and equipped with target analysing vision.

While Phase Commanders usually choose to guide their forces through radios, they will take on the Point Man and Paxton Fettel should situation demand it. A total of seven (or eight if played in co-op) Commanders are fought in the campaign: two or three in Interval 05 and five in Interval 07. They act as "bosses" and are very difficult to kill.

These Commanders are equipped with phasing devices similar to those used by Phase Casters, but the Commanders employ the phase devices to strategically approach their enemies. They carry S-HV Penetrators and Flashbang Grenades, which they use whenever retreating. Their shields must be heavily shot if one ever hopes to defeat them. Once defeated, the Commanders will die in an explosion of electricity, harming anyone close by.

Phase Commanders are known to be brutal in their methods. They do not allow their lesser troops to abandon their posts, even when the situation is dire. Oftentimes, grunts will be threatened with dismemberment, presumably by the phasing devices, should they try to evacuate. The Commanders seem to enjoy taunting their enemies, especially the Point Man, who they chase without stop, deeming him a "biological failure."

Interestingly, the Commanders themselves appear to be augmented biologically to a certain extent, as evidenced by their towering heights and sizes. As seen when Fettel possesses one, if the Commander is using the pistol, it can be seen that their hands are so large that they have trouble holding the weapon. They try to hold it in a normal manner, but it seems somewhat awkward, as they are large brutes that should be handling equipment and weapons fit for their size.

Phase Commanders, like Casters, can be possessed by Fettel, but only after their shield is down. A failsafe will trigger, preventing Fettel from using their phasing abilities. The HUD will read "Foreign Body Detected. Phasing Offline." However, their phasing abilities are still available through possession as a Spectre in the multiplayer game Soul King. They also have a targeting system similar to that of a Power Armor, highlighting enemies with either a yellow or red box, depending on threat level. They are prime candidates for possession with their high powered weapons, target assist and high defense. Also, similar to Explosive Cultists, the player has the option of using the Commander's deadly self-destruct attack as a last resort. This is useful if Fettel is surrounded by enemies and the body is almost out of health or possession time.

When possessed, the Commander cannot fit through most doorways.

Just like the Phase Caster, Phase Commanders take a long time to defeat due to their high-powered shields. A very effective way of defeating Phase Commanders is to grab a Riot shield and use the shield to deflect his fire while shooting at the Commander with the SMG accompanying the shield. Even when out of bullets, the player can still use the shield and bash the Commander to death. It takes longer but it works without taking much damage, especially on the higher difficulty levels. An Arc Beam also is a prime weapon to utilize, as it locks the Commander in place. Frag, Zap and Flashbang Grenade can also be used in almost the same regard, as they keep the Commander in place so the player can shoot freely without fear of retaliation. As Fettel, the player can repeatedly levitate and melee the Commander, which will leave him almost defenseless. Be sure not to stay in the immediate vicinity when the Commander is about to self-destruct, as the explosion will be fatal on most difficulty settings. 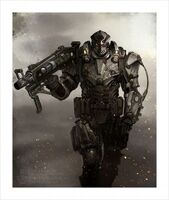 A Phase Commander with his shield up.

A Phase Commander alongside a Phase Caster and an Armacham Soldier.

Ditto.
Add a photo to this gallery

Retrieved from "https://fear.fandom.com/wiki/Phase_Commander?oldid=44262"
Community content is available under CC-BY-SA unless otherwise noted.