Phase Casters are cyborg enemies created by Armacham Technology Corporation, and are seen in F.E.A.R. 3.

Phase Casters have heavy defense shields and advanced phasing technology, which they use to summon troops to fight for them, and are equipped with Arc Beams and Flashbang Grenades, which they will use whenever they are caught in a tight spot by the player.

Phase Casters first appear in Interval 02, where one attacks the Point Man and Paxton Fettel. From there, they appear semi regularly throughout the campaign. A total of six are encountered in the campaign, with one acting as a "boss" that can only be defeated in a very specific way. One appears in Intervals 02, 04, 05 and 07, while two appear in Interval 06.

Their phase system will recognize only themselves. This is demonstrated when Fettel possesses a Phase Caster, to which the system's HUD reports that it detects a "foreign body"; thus disabling any phasing abilities the Caster has. However, their phasing ability is available for use in the multiplayer game mode Soul King, in the case that they are possessed by the player, a spectre.

They usually summon a small force of standard Armacham enemies and/or Replica Troopers in groups of three to five to attack the player, and then provide firing support from a greater distance or raised platform with an Arc Beam. The weapon does heavy damage, and should be avoided as much as possible. When the enemies that were summoned are killed, the Phase Caster will summon another wave again and again until he either runs out of troops to summon or the player is killed.

The Casters have a good deal of health due to their energy shields, though are somewhat easier to kill than the Commanders. They should be targeted first because of their ability to summon a large number of enemies to the battlefield, though eventually the Caster will run out of enemies to summon. Alternatively, if the player cannot deal with every enemies at once, take out the regular troops first, then deal with the Caster. When alone, he will resort to sprinting and sniping at the player from a distance, yet remains highly vulnerable to repeated attacks. Despite armed with Arc Beam, he has a considerable reach, its highly recommended to stay out of his sight until the player is ready.

Alternatively, killing the waves of summoned soldiers first is a good way to complete achievements/trophies (for extra points and rank increases), as many achievements require kills.

Phase Caster after being possessed by Fettel. 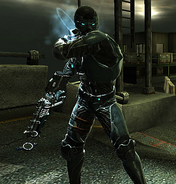 A Phase Caster with his shield down.

A portal opened by a Phase Caster.

A Phase Caster along with an ATC soldier and Phase Commander.

Phase Caster about to be sniped by Point Man.

The Phase Caster at the end of Interval 04.
Add a photo to this gallery
Retrieved from "https://fear.fandom.com/wiki/Phase_Caster?oldid=42767"
Community content is available under CC-BY-SA unless otherwise noted.