The N6A3 Fragmentation Grenade is a thrown explosive set on a timer, but can also detonate on contact with a live enemy or if shot. Once the handle is released, the seconds count down to detonation. Grenades can be used to flush enemies out of hiding, and to quickly harm or kill otherwise unreachable enemies. The splash damage from an N6A3 is strong enough that it's possible to outright kill most enemies or stun tougher ones like the Replica Heavy Armor on a direct hit and groups if it detonates nearby, but it's also notably easy for an unwary player to kill themself with their own grenade even on Moderate difficulty, so caution is advised.

An effective way to use a grenade is to combine it with Slow-Mo – use Slow-Mo first, pop out and throw the grenade, then move back into cover. It's a simple method, but nonetheless very effective against most enemies, as it gives the player more time to aim and reduces the likelihood of return fire. However, when throwing a grenade from cover, there is always a chance that it may collide with the scenery, causing it to miss or even bounce back.

Notably, enemies will usually announce that a grenade has been thrown, giving the Point Man time to move away before the explosion. Even if he does not hear the warning, a thrown grenade will clatter loudly when impacting a surface.

The N6A3 Fragmentation Grenade is a steel bodied sphere designed to burst into numerous fragments when detonated. Composition 'B' plastic explosives packed inside the grenade provide its explosive power. The weapon has an effective kill radius of 5 meters and is useful against entrenched or defiladed hostiles.

The N6A3 hand grenade returns in the sequel but behaves differently. Most notably, thrown grenades no longer detonate immediately on contact with hostiles, although the grenade will do a small amount of damage when directly impacting a target. Additionally, the player can "cook" the grenade by holding the throw grenade button; a five-tic fuse will be shown on the screen until the grenade button is released. Most hostiles in the game will attempt to flee from a live grenade, thus Becket has to time his throw correctly to harm the enemy without blowing himself up.

It's possible to get harmed by the grenade by not releasing the throw key until the fourth or fifth tic of the fuse, a common trick is to release the grenade when it counts at the third tick, this will make the grenade very difficult to avoid for the enemy, provided the player does not panic and throw it in the wrong direction or allow the grenade to touch the debris and bounce back. Enemies use grenades against the player much more often than in the original F.E.A.R., however, the AI is not smart enough to time the fuse, which means an alert player usually has enough time to run for cover before the grenade detonates. The grenades also make noise when they drop on the ground or touch a wall, giving Becket more warning if he didn't see the grenade coming. On Hard it's best to get away from live grenades as fast as possible, as usually an N6A3 will kill the player when they are inside the blast radius (~5 meters radius).

In F.E.A.R. 2, active (i.e., thrown) grenades glow yellow, which makes them easier to spot in a firefight. Enemies are more likely to throw grenades when there is a stand-off between them and the player.

Many hostile infantries will drop a usable N6A3 when killed, especially when the player is running low, so the player should usually have enough for most battles.

The N6A3 makes a return in F.E.A.R 3, with most of the characteristics seen in F.E.A.R. 2, except now the grenade will explode immediately on contact with an enemy, and grenades will no longer explode in the player's hand when the fifth tic is reached when "cooking" the grenade, so it's almost always safe to cook the grenade. Frag Grenades are quite common, being most often found in weapons stashes and occasionally dropped by Armacham soldiers and Replica shotgunners if the player is running low.

Enemies will often call out when they toss a grenade, giving the player time to move away from the blast zone. When in both "idle" and "active" (i.e. thrown) states, the grenades produce a bright red glow, making them easier to spot in dark areas, in addition to the bright yellow word "FRAG" printed on the side of the grenade. Also, like Zap grenades, the N6A3 emits a beeping sound and red blinking light while active.

Whether armed or not, an N6A3 will go off when shot, just like Zap grenades.

Frag grenades appear in all Intervals except Interval 08. 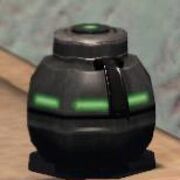 The grenade's appearance in F.E.A.R., Extraction Point and Perseus Mandate. 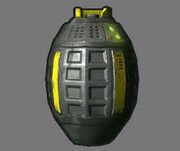 F.E.A.R. 3 grenade concept art: Flashbang on the left, Frag grenade on the right.

N6A3 in F.E.A.R. 3, notice the "FRAG" and the red light emitted from it.
Add a photo to this gallery
Retrieved from "https://fear.fandom.com/wiki/N6A3_Fragmentation_Grenade?oldid=43002"
Community content is available under CC-BY-SA unless otherwise noted.