"You can't send him in alone, that's crazy!"
—Jin arguing to Betters about sending Point Man to find Fettel alone.

Jin Sun-Kwon is the F.E.A.R. technical officer. A young, dependable Korean-American woman of small build, she also serves as the F.E.A.R. Team's combat medic and is in charge of in-field forensics. She wears a light combat vest version of the D-12 Heavy Body Armor that most F.E.A.R. operatives wear. She has no weapons training and is always escorted by a Delta Force operative or inserted after an area is secured by a combat team. Jin is voiced by Susanna Burney in F.E.A.R. First Encounter Assault Recon and F.E.A.R. Extraction Point, and by Kim Mai Guest in F.E.A.R. 3.

Jin's parents are from Seoul, but she was born and raised in the USA. Jin claims she used to be given the opportunity to visit South Korea once every year, but her work with F.E.A.R. has grown to the point where she can no longer fulfill those trips. She is believed to be the closest member of the F.E.A.R. team to the Point Man. Armacham Technology Corporation had speculated on the possibility that Jin was in a relationship with the Point Man. An investigation was launched but no evidence was ever found linking the two, making a relationship unknown. Jin is one of the few people that have seen the Point Man without his mask.

Jin Sun-Kwon, like the other members of the F.E.A.R. team, is called in for an emergency briefing on a situation involving an escaped psychic commander and his troops soon after the Replica uprising at the Perseus Compound. During the briefing, she identifies that Paxton Fettel's cannibalism of Armacham researchers "isn't just recreational," describing him as having an agenda. Later, when Spencer Jankowski raises questions over putting the Point Man in the field, Jin reassures him that the Point Man will be fine.

Jin stays in Auburn to conduct a forensic investigation while Jankowski and the Point Man link up with Delta Force and make their way to the South River Wastewater Treatment Plant. After completing her forensic investigation in Auburn, Jin also makes her way to the facility. She and Delta Force Operative D. Passalaqua are the first to find the Point Man after he is knocked unconscious by an explosion, and Jin protests when F.E.A.R. team coordinator Rowdy Betters sends the Point Man back in after Fettel by himself.

While the Point Man tracks Fettel, Jin continues to search for Jankowski, who was also lost during the explosion, and while she manages to locate the bodies of the Delta Force team he was with, she doesn't find Jankowski's before being put on standby to be sent into Armacham Technology Corporation Headquarters. She and Passalaqua arrive at the site of the Delta Force Recon team's last known position not long after the Point Man. She is shocked by the blood covered room, describing the bodies as having undergone "almost complete liquefaction," assuming that it may have been caused by a chemical agent, as none of the Recon Team managed to fire a shot.

After completing her analysis of the Recon Team's bodies, Jin and Douglas Holiday accompany the Point Man to the Rammelmeier Industrial Compound in the Auburn District, but their UH-60 Blackhawk Helicopter is shot down, killing the pilot, and leaving Jin injured. Holiday stays with Jin, commenting to the Point Man not to worry and that he won't mess with his "girlfriend" while the Point Man continues on alone. If players decide to stay longer, they can hear some interesting background information on Jin and hear some humorous dialogue between Holiday and Jin. Just before entering the Origin Facility, the Point Man overhears that a Medevac has arrived at Jin and Holiday's position.

After the Point Man is knocked unconscious by the shockwave of the Origin Facility Explosion, he wakes up to find he has been brought aboard a UH-60 Blackhawk Helicopter by Jin and Holiday. Jin informs the Point Man that they have been unable to contact anyone since the explosion and wonders what happened to Alma, whose body was destroyed in the explosion. The Blackhawk then shakes violently as Alma begins to pull herself inside .

After the helicopter carrying the Point Man, Douglas Holiday and Jin Sun-Kwon crashes, Jin awakens to find Holiday and the Point Man missing, with Alma Wade's foot prints leading away from the crash site. Moments later the pilot, Bremmer, is attacked and killed by Alma.

Early in the events of F.E.A.R. 3, Jin is heard over the radio, asking for any friendlies to the US military to come to Fairport. Upon being united with the Point Man, she shows him a recording of Michael Becket talking about his rape at Alma's hands, and the impending birth of Alma's third child. Jin tells the Point Man that Alma's contractions are destroying the city, and she insists that he must stop Alma.

She is later captured by cultists and separated from the Point Man, due to the sudden opening of a sink hole. Later on, she manages to escape from them and asks the Point Man to continue forward to the Fairport View Tower and meet up with her. At some point, she is captured by a Phase Commander and the Point Man sets out to rescue her.

After she is rescued, she stays back to help the Point Man from afar as he locates Becket in the Port Authority Airport and tries to stop Alma. She survives Alma's contractions and Armacham's soldiers, and contacts the Point Man to inform him that things have returned to "normal" once he completed his "mission".

Curiously, Jin's voice is not heard over the radio if Fettel's ending is played, leaving what happened to her in his ending a mystery.

After Douglas Holiday's death at the hands of supernatural enemies, the Point Man receives several radio transmissions from Jin warning him of Replica Soldiers, as well as otherworldly entities hunting him. The Point Man also has a psychic vision of Paxton Fettel confronting Jin. Fettel promises not to harm Jin, but says that he "can't say the same for my mother."

Jin manages to make it to the Memorial Hospital before the Point Man, only to find all the Delta Force operatives dead. In her final transmission, Jin expresses concern that the Point Man isn't coming for her, and despairs that she is going to die alone with "them."

As the Point Man gets closer to the Memorial Hospital, both Spencer Jankowski and the young Alma Wade appear to him, urging him to hurry. When the Point Man finally reaches the Auburn Memorial Hospital, he is drawn into a hallucination of maze-like hallways. Jin is seen running across the Point Man's path, followed by Nightmares attacking the Point Man, with one Nightmare going after Jin. After following Jin, the world reverts back to normal and the Point Man hears her scream from one floor above him. Following the trail of blood up the stairs, the Point Man finds three twitching apparitions floating around Jin's dead body, her camera repeatedly taking pictures of her own corpse. Its not known her exact cause of death, but it might be similar to Douglas Holiday, killed by the twitching apparitions' telekinesis attack. 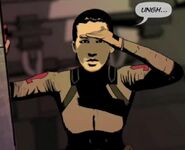 Jin after waking in the DC Digital Comic. 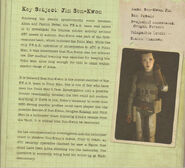 Jin, Spen and Rowdy during the briefing.

Jin being kidnapped by Cultists.

Jin in F.E.A.R. HQ during the briefing.

Jin in the ATC HQ witnessing the aftermath of the massacre.
Add a photo to this gallery
Retrieved from "https://fear.fandom.com/wiki/Jin_Sun-Kwon?oldid=44336"
Community content is available under CC-BY-SA unless otherwise noted.