James Fox is a Delta Force Operative and member of Dark Signal who works alongside Michael Becket in F.E.A.R. 2: Project Origin.

Fox is respected by the rest of his teammates as one of the longest serving veterans. He treats Harold Keegan when the headache-suffering soldier is shot by an Armacham guard.

Early in the game, Fox reports having seen a woman crying, and attempts to help her. Sometime later, he is heard over the COM again, tearfully exclaiming that "they took her babies and they didn't even let her hold them."

Upon finding Fox in the Harbinger Facility, Michael Becket is attacked by the enraged soldier, who has undergone a startling change in personality. Fox snarls and tells Becket to "stay away from her, she's mine," slamming him against the wall. A second later he reels back, clutching his head, and then looks at Becket with confusion and exclaims "Becket?" Whispering is heard around Fox as he struggles to regain his former personality and free will. He is then killed by Alma Wade, the woman whose crying he had been hearing, his flesh literally torn from his bones as Alma screams in rage.

It is revealed that Fox was a Harbinger candidate and had a wife and seven-year old daughter. Interestingly, his daughter's age seems to match that of Alma when she was put into an induced coma as part of Armacham Technology Corporation's secret Project Origin. When Fox reels back in pain after attacking Becket, Alma is heard whispering, "I want them back." then, "I want my babies back!" Suggesting that she mistakes Fox for her father. She then begins screaming "I hate you!" repeatedly as she kills Fox, due to her confusion and strong hatred of her father. The Armacham Field Guide supports this, saying that Alma may be dangerous to Fox due to his devotion to his daughter, combined with Alma's "daddy issues."[1]

Fox just before his death.

His bio from the Armacham Field Guide.

Fox with his teammates in the APC at the beginning of the game.

Fox's ID in-game
Add a photo to this gallery 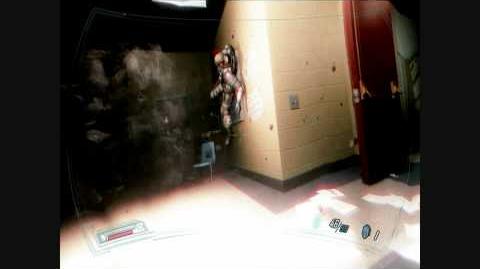 James Fox Death
Fox's death.
Add a photo to this gallery
Retrieved from "https://fear.fandom.com/wiki/James_Fox?oldid=42271"
Community content is available under CC-BY-SA unless otherwise noted.