Doctor Green is an Armacham Technology Corporation scientist seen only in the Alma Interviews. She attempts to study and interview Alma Wade, but is instead slowly driven insane by Alma's immense psionic powers.

Green starts by introducing herself and trying to get Alma to talk. Alma, however, refuses and Green begins writing notes. She then tries to persuade Alma to show her face. Alma again refuses and Green becomes irritated with the child's refusal to do as asked.

By 10:37 a.m. Green becomes aggressive towards Alma, and begins speaking loudly to her. She hears a noise in an air vent, then turns to see that Alma has disappeared. She then sees Alma's reflection in a mirror, and becomes aware that Alma is psychically attacking her.

Green then threatens to send Alma back to her cell if she doesn't cooperate. Alma still says nothing, so Green goes back to her desk and prepares to send her back. Alma causes Green to lose control of her right hand, causing her to draw a picture of a prototype Replica. Alma demands to know who the man in the picture is, but Green refuses to answer her.

By the afternoon, Alma has taken control away from Green. Alma sits at Green's desk while Green sits in the chair Alma was previously in, showing a reversal of their roles. Alma taunts Green, asking if she likes to play games, to which Green replies negatively. Green is shown flashes of Alma's life trapped in a small cell, and is then transported there by Alma. The hallucination ends, and Green finds herself back in the interrogation room. She hides in the corner and pleads with Alma to stop attacking her, but the angry child persists, showing Green flashes of the Replicas. Alma proclaims that the Replicas told her that Green intends to kill her, something that Green vehemently denies.

Terrified and being closed in on by Alma, Green throws a chair at the young girl, which causes the hallucination to end. She then crawls out of the room as Alma skips happily around her. 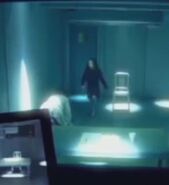 Alma skipping happily as Green crawls towards the door.
Add a photo to this gallery
Retrieved from "https://fear.fandom.com/wiki/Green?oldid=42466"
Community content is available under CC-BY-SA unless otherwise noted.