This is the article about the video game. For the experiment of the same name, see Project Origin.

F.E.A.R. 2: Project Origin is the sequel to F.E.A.R. First Encounter Assault Recon, developed by Monolith Productions for Microsoft Windows, Xbox 360, and PlayStation 3. A demo unrelated to the campaign is currently available for all formats. The game was released on February 10, 2009, in the North American region, and in Europe on February 13, 2009.

"''Project Origin is a strong fan and developer favorite. We received over 400 submissions containing Origin in the name. The second submission of the contest was Project Origin, so we have had the name rattling around in our heads right from the beginning Project Origin is a natural fit for the title of the sequel because it is the Armacham program from which all of the trouble in the game world originates. The architect of Project Origin, Harlan Wade, used his daughter in a horrific experiment which turned her into the monster that we see in the first game. ..... In the sequel, the repercussions of Project Origin are only beginning to unravel."
—{{{2}}}F.E.A.R. 2 was initially only called Project Origin, due to Monolith having lost the rights to the F.E.A.R. title to Vivendi. During that time, a contest was held by Monolith asking fans to name the new sequel, allowing voters to submit choices, three of which were then chosen to be voted on. The three top choices were "Dark Signal," "Project Origin," and "Dead Echo." It was revealed the "Project Origin" had the most votes, and the game was then officially titled Project Origin. However, poor sales of Vivendi's F.E.A.R. expansion packs led them to sell the F.E.A.R. title rights back to Monolith, and the game was then officially dubbed F.E.A.R. 2: Project Origin.

The follow-up has stayed in F.E.A.R.'s existing universe, retaining the original storyline and characters, although it doesn't recognize the events of F.E.A.R. Extraction Point or F.E.A.R. Perseus Mandate as part of its canon. The game was shown for the first time at the 2007 E3 Expo with an Xbox 360 demo. The demo footage showcased the game's enhanced Jupiter EX engine, and reveals glimpses of the plot, starting with a cutscene of Michael Becket undergoing surgery overseen by Genevieve Aristide, with unexplained complications, later revealed to be caused by Alma Wade. The game showcases a more varied level design than in F.E.A.R., however, certain gameplay elements within levels, such as Medkits, return.

The sequel to F.E.A.R. continues the supernatural suspense story of the supernatural being, Alma Wade, whose rage against those who wronged her caused her to begin an escalating paranormal crisis that threatens to devour and replace reality with her own. Instead of playing as the Point Man, the game's protagonist is Michael Becket, a Delta Force operator whose squad is sent in to arrest Genevieve Aristide approximately thirty minutes before the ending of F.E.A.R.

The game opens with Alma swinging on a swing next to a tree, but before Becket can get close, the screen fades out and he experiences a hallucination involving a ruined city, where he sees Alma and proceeds to follow her to a hole that goes back to the real world. However, as he recovers, he hears music playing and Alma's child form grabs him before suddenly disappearing. Becket's squad arrives at a penthouse complex where Aristide lives, only to find it under assault by a Black Ops team of mercenaries dispatched by Armacham's Board of Directors. After saving Aristide, Becket uncovers hints of a project known as "Harbinger," which involves himself and several of his teammates. Aristide claims that Becket and his team are the only way to stop Alma, but before she can elaborate, the F.E.A.R. Point Man detonates the Origin Facility's reactor, and Becket is stunned in the explosion. Before fully losing consciousness, he catches a brief conversation between Aristide and unknown men, telling them to load him and his squadmates into a chopper.

Falling in and out of consciousness, Becket finds he is being operated on by a team of doctors under orders from Aristide, and begins seeing more visions of Alma. After he recovers, he finds he is in a hospital deep underground, along with the rest of his squad. The hospital comes under attack by ATC clean-up crews led by Colonel Richard Vanek, and Becket must fight his way out. While escaping, Becket receives communications over his radio from a man who calls himself "Snake Fist." On the way out of the hospital, Becket finds squadmate Redd Jankowski torn up by a surgical machine. Before dying, Jankowski asks Becket if he can "hear it", and that they "have to help her", referring to Alma, unknown to Becket.

After escaping the hospital and confronting the commander of the ATC forces, Becket fights his way to the surface, encountering the reactivated Replica troops. As he tries to escape the hospital, Becket is repeatedly physically assaulted by Alma, who Snake Fist says is trying to "absorb" Becket, drawn to him by the psychic energy he now emits after his operation.

After reaching the surface, Becket regroups with what is left of his team, fighting through the ruins of Fairport against innumerable squads of Replica soldiers and mechs, as well as paranormal horrors. After rescuing Lieutenant Stokes from snipers, they link up and make their way to Master Sergeant Griffin, only to watch helplessly as Alma kills him. With no way to help or avenge him, they return to the APC and the rest of Dark Signal.

Now consisting only of Becket himself, Lieutenant Keira Stokes, and Sergeants Manuel Morales and Harold Keegan, the squad moves to nearby Wade Elementary School, an Armacham-controlled school where Snake Fist and Aristide are hiding. Keegan leaves for recon duty as Becket and Stokes enter the school through the front entrance. After a suspenseful search for clues, they are separated by Alma. Becket fights through more paranormal anomalies and attacks from Alma as he attempts to link up with Stokes, though once he does, he is ordered to find Snake Fist in the nurse's office. Once he reaches the basement, Becket discovers that the underneath of the school is another Armacham research facility, used for a project known as "Paragon." Here, Becket discovers that Project Harbinger was an attempt to create more psychic commanders similar to Paxton Fettel without the use of Alma Wade, and that Becket and Keegan were the most promising subjects. Project Paragon, meanwhile, is intended to condition psychically-gifted children to work for ATC.

In the basement facility, Becket fights through more ATC troops and Replica soldiers, as well as "specimens" from past Harbinger experiments. Becket kills Colonel Vanek and finds Snake Fist. Snake Fist reveals himself as a researcher for Armacham, and explains that the only way to defeat Alma is to travel to an Armacham base inside a nuclear reactor underneath nearby Still Island, which houses a device that can amplify psychic power. With this device, Becket can possibly defeat Alma with his own psychic abilities. Snake Fist insists that they must leave immediately, then presents Becket with an experimental weapon he took from the facility. Upon taking the weapon, a Replica Assassin jumps down from the ledge and decapitates Snake Fist, instantly killing him.

En route to Still Island, Becket's squad is ambushed by Replica troops, and Sergeant Keegan wanders off in a daze during the battle. Becket follows and tries to recover Keegan, but is instead delayed by Replica forces. After fighting off both the enemy soldiers and more of Alma's assaults, he eventually reunites with the remainder of the squad underneath Still Island and heads for the Armacham facility. Becket enters the Telesthetic Amplifier, but as Stokes prepares to power up the machine, she is interrupted by Genevieve Aristide, who explains that she operated on Becket so he would serve as a lure for Alma. Instead of destroying her, Aristide plans to seal Becket and Alma inside the device together, so she can use Alma as leverage against Armacham. Stokes disagrees with Aristide's intentions, and reaches for her gun, but is shot by Artistide. Stokes collapses, with her ultimate fate left unknown.

Alma then appears and blows Aristide away from the Amplifier, allowing Aristide to reach the control panel and seal the chamber as the walkway retracts. Alma pays her no attention, instead focusing on Becket, who she sends into another "hallucination," where he fights off apparitions of a maddened Sergeant Keegan while trying to activate the Amplifier and destroy Alma. As Becket fights Keegan, the battle is interspersed with images of Alma raping him. Finally, after activating the last switch, Becket escapes the hallucination to find himself sealed inside the device. The device is unsealed from the outside by Alma, who walks up to Becket and reveals she is pregnant, having raped him while he fought off the phantom image of Keegan. Alma takes Becket's hand and places it over her stomach, implying that the child is his. The game ends with Becket hearing the child whisper "Mommy" from inside Alma's womb.

An expansion to the single player campaign was released on September 2, 2009. Titled F.E.A.R. 2: Reborn, the player assumes the role of a Replica soldier codenamed Foxtrot 813, who is used by Paxton Fettel as a vehicle to facilitate his rebirth.

F.E.A.R. First Encounter Assault Recon, though highly praised by critics for its suspenseful atmosphere, intelligent AI, and kinetic gunplay, was widely criticized for its unimaginative level design, and the fact that the main horror element, Alma, hardly ever physically interacted with the player character. Taking these things into consideration, Monolith Productions improved several aspects of design in F.E.A.R. 2: Project Origin. With the recent changes made to the Jupiter EX engine, the team of developers at Monolith added substantial detail and color into the F.E.A.R. universe with carefully designed levels full of real-world objects; these can be used for cover via an action button command to flip over or slide suitable objects. The game also boasts a redesigned damage system which allows Michael Becket to tear apart everything from cars to buildings.

John Mulkey, lead designer for F.E.A.R 2, stated that Alma would "touch" Becket more, suggesting that the physical interaction that F.E.A.R. had lacked would become an ongoing part of the storyline in the sequel. The creation of a new enemy, the Remnants, increased the amount of physical interaction between Becket and the forces of Alma, granting the player a more intense experience.

F.E.A.R. 2 received mostly positive reviews. Aggregating review websites GameRankings and Metacritic gave the PlayStation 3 version 79.19% and 79/100, the PC version 77.86%, 79/100 and the Xbox 360 version 77.74% and 77/100. Eurogamer awarded the game 5/10. While agreeing that it was a rock solid shooter, Eurogamer claimed the lasting impression is "one of a woeful lack of inspiration." Among its criticisms were poor story development, uninspired level design, and poor execution in the developers' attempt to vary gameplay with the addition of mech armor. GamePro magazine rated the game with a 4/5, praising the slow-mo effect and gameplay, but criticized the opponent A.I., level designs, and the game ending on a flat note. Resolution Magazine awarded the game a 76%. They praised the game's polish, and described it as enjoyable, despite its lack of creativity.

On its release, F.E.A.R. 2 debuted at number two on both the United States retail PC charts, and on the UK all formats charts. It was also the most queued title on GameFly. 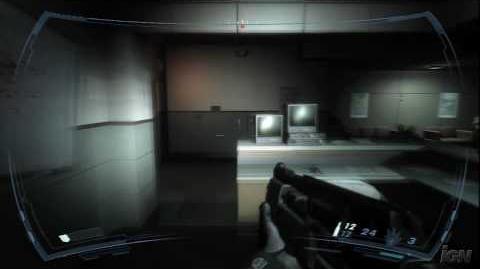 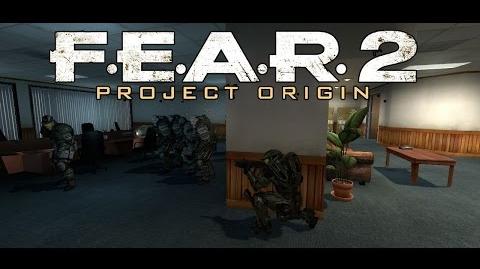