The game follows the exploits of a new player character, a member of a secondary F.E.A.R. team sent in to investigate Armacham Technology Corporation's Project Perseus. Perseus Mandate takes place during the events of the original F.E.A.R., as well as the F.E.A.R. Extraction Point expansion pack. New introductions to gameplay include friendly A.I.-controlled characters who fight alongside the player character, as well as a new faction of enemies called "Nightcrawlers"; highly trained human mercenaries equipped with advanced weaponry.

Perseus Mandate is part of the Vivendi Timeline, a canon consisting of the first game and Extraction Point. The Vivendi Timeline is considered non-official by Monolith Productions, the developer of the two official sequels to the first game. However, the events at the Perseus Compound cloning facility are briefly mentioned in an e-mail in F.E.A.R. 2. It is doubtful if Perseus Mandate as a whole, exists in the series' official canon.

Perseus Mandate begins about halfway through the events of the original F.E.A.R. After ATC Security Guards kill Aldus Bishop and openly begin to battle against F.E.A.R. and Delta Force, Rowdy Betters airdrops a second F.E.A.R. team to Armacham Technology Corporation's Secondary Facility to investigate the company and any wrongdoing it is involved with. This second F.E.A.R. team consists of David Raynes, Steve Chen, and the unnamed F.E.A.R. Sergeant, who is the player character. After battling through Replica Soldiers and ATC security guards, the second F.E.A.R. team discover that a third faction has already infiltrated Armacham's Secondary Facility and killed everyone inside. This faction consists of highly-trained mercenaries known as "Nightcrawlers," who are equipped with advanced weapons. The Nightcrawlers' ranks also include several elite super-soldiers who possess the same Slow-Mo ability previously demonstrated by the F.E.A.R. Point Man.

It is revealed that the Nightcrawlers work for the mysterious Senator, and are searching for "the Source"; the genetic template from which the Replica Soldiers were created (later revealed to be a sample of Paxton Fettel's DNA). The second F.E.A.R. team discover that Armacham Technology Corporation had 3 major facilities involved in Project Perseus: an active bio-research facility where Paxton Fettel's DNA is stored, an abandoned secret cloning facility where the Replica Soldiers were actually produced, and the Origin Facility, where Alma Wade is imprisoned. F.E.A.R. and Delta Force launch an assault against the archival facility, battling through Replica Soldiers, ATC Security Guards, and Nightcrawlers. However, the Nightcrawlers manage to obtain and escape with a sample of Fettel's DNA. The second F.E.A.R. team almost manages to capture Gavin Morrison, the Senator's main agent, but are interrupted by the explosion of the Origin facility, which throws the entire city into chaos.

The Sergeant and Lt. Chen awaken in an abandoned part of the city's subway system, and discover that the explosion of the Origin Facility has unleashed a wave of deadly paranormal activity. Chen manages to fight off an attack by the creatures that killed Douglas Holiday, but is torn to pieces by a new type of apparition, called the Scarecrow, who attacks when an unsuspecting player passes over its hole. The Sergeant continues through the subway system alone in pursuit of the Nightcrawlers. He eventually manages to reach the surface, and reestablishes contact with Captain David Raynes, who orders him to make his way to the Armacham cloning facility, where the Nightcrawlers seem to be headed. This is complicated by the re-activation of the Replica Soldiers following Fettel's resurrection.

The Sergeant eventually reaches the Cloning Facility, where he is greeted by the ghost of Paxton Fettel, who makes several cryptic communications with the Sergeant, as well as sending in Replica Soldiers to kill him. The Sergeant fights his way through Fettel's Replicas, as well as the Nightcrawlers, but is too late to prevent the Nightcrawler Commander from acquiring a sample of Alma's DNA.

The Sergeant pursues the Nightcrawler Commander through the facility, eventually battling the Commander and the remaining Nightcrawlers in a final showdown. He then acquires the sample of Alma's DNA, and escapes to the surface, where Raynes is waiting for him. The Sergeant and Raynes fight their way through Fettel's final Replica Elite soldiers, and successfully manage to reach an evacuation helicopter. When the Sergeant gets inside, Lt. Steve Chen appears to be there waiting for them. Captain Raynes remarks that the Sergeant is due for a promotion to Lieutenant, and that Chen would be proud of him. Chen's ghost then fades away.

After the credits roll, a Nightcrawler Elite is seen approaching the Senator, bringing him the sample of Fettel's DNA. The Senator asks how many losses there were, and the Nightcrawler Elite replies that losses were "acceptable." As the movie clip ends, Paxton Fettel can be seen.

Perseus Mandate also features 3 "bonus missions" that are unlocked after the single-player campaign is beaten. These bonus missions are similar to the "instant action" missions of the Xbox 360 version of F.E.A.R. and feature the player progressing through small plot-free levels while fighting through several waves of enemies.

The game also features a modified version of the original F.E.A.R.'s multiplayer, which includes new player models, as well as the 5 new weapons added by the two expansion packs (the previous expansion pack, F.E.A.R. Extraction Point, had no multiplayer component, and thus the two weapons introduced by that expansion had not previously been available in multiplayer). 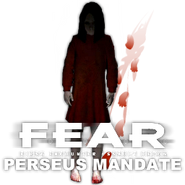