The name Enhanced Power Armor may refer to multiple subjects. Please see EPA (disambiguation) for other uses of the term.

The Enhanced Power Armor is F.E.A.R. 3's replacement of the Elite Powered Armor from F.E.A.R. 2. They are normally encountered when the player is piloting another type of Power Armor, as they are a very difficult opponent to fight.

A follow-up from the program that produced the prototype Elite Powered Armors, the Enhanced Power Armor is a bipedal mechanized walker with powerful weapons and very tough armor.  Unlike in F.E.A.R. 2, the enemy suits have operational auto repair systems, making hit and run attacks very difficult. They act somewhat as "bosses" of each level when encountered. They are fought in Intervals 06 and 07, as well as in the map "Mechanized Invasion" for the multiplayer mode Contractions. The player is only able to pilot it during Interval 06. Just as with the REV9 Powered Armor, Paxton Fettel must possess a body before being able to pilot the Armor.

Different from F.E.A.R. 2, EPAs are never fought on foot, unless the Powered Armor that the player has been using is destroyed and/or heavily damaged enough to eject the user out.

Appearance wise, they look very similar to the Elite Powered Armor, except that the user boards it from the back, instead of from the front, and it has a notably more block-like appearance in addition to its different paint scheme.

Just like the EPAs from F.E.A.R. 2, it makes use of dual Gatling guns. These new ones are equipped with a pair of GAU-19/A Gatling guns, one on each arm. However, the Gatlings' performance versus armored targets is greatly reduced compared to the previous EPA. To compensate for its guns' lack of armor piercing ability, the previous mini rocket launchers have been removed and replaced with two guided missile launchers that can lock on target, then track and destroy vehicles, fitted in two triple mounted retractable armored box launchers. Each pair fires a single missile at a time, allowing for up to three firings before the suit reloads them.

The automated repair system makes a return, and largely functions in an identical manner to the previous EPA. Also, a new shield system has been fitted that completely negates any damage while active, but this consumes the shield's limited power reserves while doing so, and so it must be manually activated with a button press. Missiles cannot be launched while the shield is active, but targets can still be locked on to.

While the Elite Powered Armor had no melee attacks, the Enhanced Power Armor has no fewer than three possible melee attacks; the first is to swing its right arm in front of it, the second is to stomp the ground with one foot, sending out a damaging shock wave, and finally it can simply walk on top of infantry and crush them beneath its feet. The only thing it lacks is the thermal vision feature that its F.E.A.R. 2 counterpart possessed.

The EPA is definitely one of the most formidable foes faced in the game. Due to the combination of their tough armor, protective shield and auto repair systems; hit-and-run attacks are very difficult execute. If faced on foot, Shock Grenades will help immensely, because they will stun it, allowing the player to line up shots without retaliation. The Goliath is arguably the best weapon to utilize, but the S-HV Penetrator, Arc Beam, and high damage-per-shot weapons like the G3A3 Assault Rifle, also work wonders against the EPA as well. If fighting an EPA in a REV9 Power Armor, it is best to avoid the EPA's missiles by hiding behind something, or in the case of piloting another EPA, bring up the shield to negate the heavy damage. 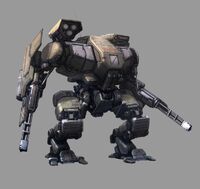 Concept of the EPA.

Early concept art of the EPA. 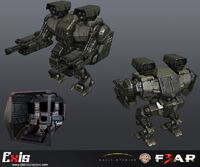 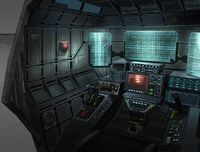 Render of the EPA's interior. 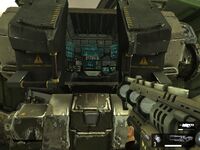 An EPA in the Almaverse.

The EPA with shield activated. 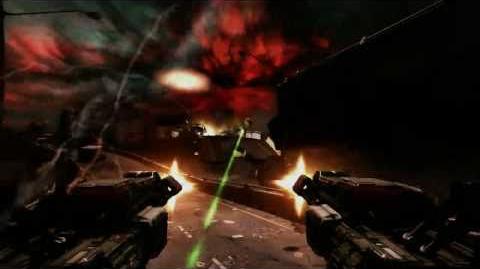