The name Elite Power Armor may refer to multiple subjects. Please see EPA (disambiguation) for other uses of the term.

The Elite Powered Armor, also known as powered armor or EPA for short. It both a drivable vehicle and an enemy in F.E.A.R. 2: Project Origin.

The Elite Powered Armor appears to be a follow-on from the program that developed the Replica REV6 Powered Armor, as seen in F.E.A.R. First Encounter Assault Recon. Compared to that unit, the power armor is larger, bulkier and more heavily armed, possibly designed to deal with enemy powered armor and light armored vehicles, as opposed to the infantry support function of the REV6.

The powered armor is equipped for both anti-vehicle and anti-infantry work, being equipped with two high-caliber three-barreled rotary guns mounted on its forearms, and two rocket launchers mounted in the unit's shoulders. The rotary weapons are enough to tear even the strongest infantryman to shreds and even damage some buildings, while doing substantial damage to other Powered Armor units. Their spin-up time is extremely rapid, though increased in multiplayer.

The rockets are small, unguided high-explosive devices that are fired in a four-round barrage and spiral towards their target, landing roughly where the powered armor's targeting reticule was pointed. They have a substantial blast radius and are very effective against both armored targets and infantry. After firing, there is a four-second delay as the powered armor automatically reloads the four missile tubes, with the suit announcing 'Missiles armed' when they are available again. As they fire from the upper torso of the suit and travel slightly upwards, using them in a confined space is unwise, and can result in the rocket barrage hitting the ceiling and damaging the powered armor itself.

The powered armor clearly carries an exceptional amount of ammunition, to the point that running out is a non-issue. However, thermal issues remain; the EPA's rotary guns rapidly heat up to the point that it becomes dangerous to the operator, whereupon the suit automatically enters a cooldown mode that briefly prevents the main weapons from being fired.

Most of the HUD is dedicated to the weaponry; the "boxes" to the sides indicate the status of the missile armament, while the boxes in the mid-lower section are heat indicators for the two rotary guns; these change to display "OVERHEAT" if the weapons overheat, along with a warning siren. In the center either side of a graphic of the suit are two health bars indicating the power armor's current status.

The only real weakness of the vehicle in terms of armament is the limited vertical traverse of the power armor's arms and field of view; it is only able to look around 45 degrees off horizontal in either direction, as well as a limited vertical view, allowing soldiers to get into the "blind spot" directly in front of the suit where it cannot attack them. However, as a final means of attacking at extremely close range, the suit is able to simply stand on opponents, killing them instantly.

The Powered Armor has many on-board features to assist the operator and ensure both their safety and its own. The main feature is an advanced self-repair system that allows the powered armor to restore its suit strength any time it isn't actively sustaining further damage, coupled with an emergency mechanism that ejects the pilot if critical damage is sustained and refuses to allow the pilot back inside until repairs have been made. This means that an power under Becket's control is effectively invincible. Enemy EPAs have additional protection in the form of a glowing hemispherical shield; strangely, Becket's powered armor does not have such a device, or if it simply isn't visible from the operator's side.

The powered armor features a sophisticated Target Detection and Identification (TDID) system which is capable of evaluating and highlighting potential hostiles. Normal enemies are highlighted with an orange-bordered box, while a red-bordered box indicates a severe threat such as a missile launcher or another Powered Armor. In addition, the suit is fitted with an FLIR (forward-looking infra-red) system for low-light or night operations, and a telescopic zoom function with a built-in rangefinder for engagement of distant targets. While not able to be used in the game, the suit also visibly mounts a set of headlamps for illumination in dark areas.

For dropping into hostile areas, the powered armor can be configured to generate a protective barrier around its air-drop container that gives it the appearance of a descending meteor, and is able to fight almost instantaneously on landing. The EPA features two large lifting eyelets on its shoulders right above the rocket packs, showing ease of transport was a major concern in its design. The vehicle is fast for its size, and extremely mobile even over relatively difficult and uneven ground.

As a controllable vehicle[]

The powered armor is encountered twice during the course of the game in a controllable state, first in Interval 04 - Top, then again in Interval 06 - Epicenter. In the first instance, a Replica soldier has just exited the vehicle, allowing Becket to commandeer it, while the second illustrates the danger of the auto-ejection system; an EPA is found in a pool of water near a downed power line, having ejected its pilot into the water with fatal consequences and unable to complete repairs due to constant minor damage from the electrified water. After Becket destroys the nearby fallen transformer, he is able to take the vehicle for himself.

In both sections, the EPA simply has to destroy everything in its path; both times this includes numerous Replica soldiers and Powered Armor units. Becket is free to enter and exit the vehicle as he wishes to collect supplies, but regardless, eventually he will reach a point where the EPA can no longer progress, and will be prompted to exit it.

Also, once it has taken enough damage, it will force the controller to leave or else they will be automatically ejected (as the reason why the Replica mentioned above died), and go into what it calls "hibernation." It will regenerate health in this state, allowing Becket to control it once again after leaving hibernation.

Three EPAs are encountered as enemies in the game; the first two are in Interval 04 - Devastation - Ruin and the third in Interval 06 - Deterioration - Epicenter. The first is defeated by a Black Ops Heavy Soldier with an Andra SR5 Missile Launcher, leaving Becket to face a second alone immediately afterwards as it slaughters the ATC team upon landing. The third engagement is much less difficult than the second, as Becket is in an EPA himself.

Enemy powered armors are capable of being totally destroyed, unlike those under Becket's control. The pilot ejection system seems non-functional for the enemy suits, this may be due to the repair system being damaged beyond any chance of fixing, or simply due to the game's design. Some of the Replica soldiers who pilot them are seen outside their suits, the one in Interval 04 - Top will jump out the vehicle, leaving the powered armor for Becket to operate, and the one spotted in Interval 06 - Epicenter, having been burned beyond recognition.

In the hands of the enemy, the EPA is vulnerable to sudden electric discharges, either from XS Shock Grenade or from downed electrical transformers, which are often present if a Powered Armor Unit is going to be fought on foot. A successful attack will immobilize the EPA briefly, allowing for a follow-on strike with heavier weaponry against the defenseless suit. The enemy powered armor will use the rotary cannons as its primary weapon, it using missiles is quite rare. Despite this, the rotary cannon is more deadly than the one found on REV6 Powered Armor, and the missiles are absolutely lethal to Becket if a direct hit is scored. The missiles can be easily dodged using Slow-Mo, and its poor mobility can be used by players to their advantage.

When fighting it on foot, the missile launcher is the best weapon of choice, and even better if combined with shock grenades. However, Armacham HV Hammerhead, Patten PK470 Assault Rifle, Andra FD-99 Submachine Gun and even shotguns can be used to bring the powered down, although this will eat away tons of ammunition and time. If Becket managed to find a spot that the powered armor cannot get in, that spot can be used to disable the powered armor - though this carries risk if the enemy EPA decides to use missiles to hammer him. This is more likely to happen if the cover is thin, thus look for the more fortified cover, even if the missiles are fired, the player is more likely to survive.

The powered armor is the toughest enemy in the game, and the only one able to withstand more than a single shot from the Type-12 Energy Weapon Prototype.

In an aerial targeted-drop scenario, secure
the drop container's secondary power
connections (Cables E and F) to the main
reflux nexus with the quick release clamps
found on the anterior connection nodes (see
figure 21c). The protective interference
field will shield the unit from crushing
impact and strip away the drop container in
addition to readying the unit for immediate
combat. As a safety precaution, the pilot
should refrain from eating for several hours
prior to airdrop.

One of the Elite Powered Armor's most
powerful features is a failsafe self-repair
mechanism, designed to allow for minor
repairs during combat and major repairs when
the machine is in lockdown mode. Pilot will
be ejected during lockdown to prevent injury
during repair sequence.

NOTE: The Elite Powered Armor Unit is
designed for the use of Replica soldiers and
Class B or higher exoskeleton pilots only.
Use by untrained military personnel,
civilians, or children is not recommended or
supported by Armacham Technology
Corporation.

We've identified a potential weakness in the
Replica Powered Armor units that have been
deployed through the downtown area.
According to the specifications, the
prototype models have inadequate shielding
around the power core, making them
susceptible to electrical disruptions. If
you don't have any XS Shock Grenades, try
shooting electrical transformers while
Powered Armor units are passing underneath.

An EPA firing a rocket barrage in the PS3 demo.

Becket looks up at an unoccupied EPA. 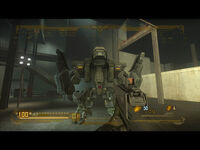 An EPA encountered in Reborn by Foxtrot 813. 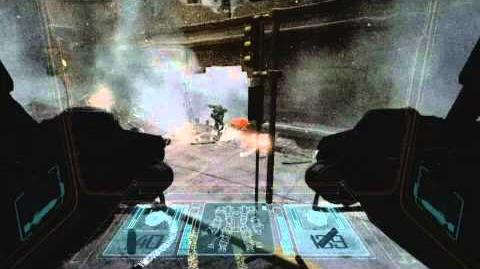 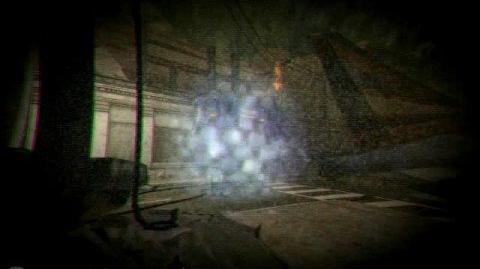 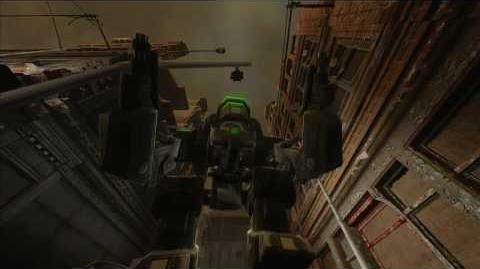