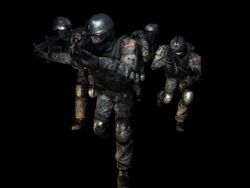 The U.S. Army's 1st Special Forces Operational Detachment-Delta (SFOD-D) is present for the whole duration of both F.E.A.R. timelines. The first game of F.E.A.R. sees Delta Force operators assisting the F.E.A.R. unit, though they are delegated with off-screen roles.

During the events of the first game, Delta Force operators are tasked to assist the Point Man and the F.E.A.R. unit. Their primary mission involves capturing Paxton Fettel and engaging all hostile threats. But, through circumstance or situation, they are separated from the Point Man. Starting some game levels, the player witnesses multiple Delta Force operators overwhelmed by significant enemy forces. As the game progresses, some operators can be seen or heard fighting different foes with events parallel to the mission experiences of Point Man.

Operators of (SFOD-D) Delta Force appearing in F.E.A.R. wear dark urban-themed BDUs (Battle-Dress uniforms) with digital patches of brown, olive drab, and gray resembling a digital camouflage outfit. It seems to be based upon the US Army's UCP BDU Pattern.

Their ballistic vests consists of matte-black, tactical Kevlar armor composites, complete with elbow and knee protection pads. The head-gear worn by most SFOD-D operatives is a lightweight Ballistic helmet with likeness to the real-life MICH 2001 B rendered in a dark-gray finish. All of their faces are covered with black balaclavas with their eyes secured with ballistic goggles. (SFOD-D) Delta Force operators are primarily armed with RPL Sub-Machineguns and G2A2 Assault Rifles.

Many Delta Force operators are killed by Replica forces or become victims of Alma Wade. (e.g. Operators Atwood and MacReady are both shot by Replica soldiers during helicopter insertion at Armacham Technology Corporation Headquarters). Some operators fall victim to Alma's liquefaction attacks. This incident is also referenced by Delta operator Manuel Morales in F.E.A.R 2: Project Origin.

An unseen Delta Force (SFOD-D) member is A. Shepard, who acts as the main coordinator for the Delta Force teams and works in conjunction with F.E.A.R. Commissioner Rowdy Betters. He appears to be a cautious leader, reluctant to send in more of his men after losing contact with the first recon team sent into Armacham Technology Corporation headquarters.

The PlayStation 3 version of the game arcade includes a Bonus Mission which features the efforts of the initial Delta Force Recon team sent into ATC headquarters. The Xbox 360 version features Douglas Holiday escorting Aldus Bishop to an extraction UH-60 Blackhawk Helicopter. The extraction was successful, but Aldus Bishop was killed by ATC guards after riding the helicopter. Before F.E.A.R 2 came out, the (SFOD-D) Delta Force operator is only playable on console or multiplayer mode.

Despite Delta Force's reputation as an elite commando unit, they seem to have met their match with the highly-skilled, and heavily-armed Replica soldiers which are bio-engineered clones produced by Armacham Technology Corporation. During F.E.A.R. Extraction Point, many of the surviving Delta Force Operatives are killed by Alma's Apparitions. Some operators were either separated and hunted down by the Replica forces. Due to the number of gruesome casualties suffered by Delta Force, F.E.A.R.'s producers included a comedic message during the credits, stating: "No actual Delta Force operatives were harmed in the making of this game."

In F.E.A.R. 2: Project Origin, approximately 30 minutes prior to the Origin Facility Explosion, a Delta Force squad code-named "Dark Signal", is sent to arrest Armacham Technology Corporation President Genevieve Aristide for the madness she helped unleash. The protagonist of the game named Michael Becket is one of the Delta Force operatives.

However, the Delta Force squad known as "Dark Signal" failed the task as Becket was abducted by Aristide after the Origin Facility Explosion. Captured, Michael Becket was then subjected to a physical augmentation surgery which is performed by Dr. York and overseen by Genevieve Aristide that aims to replicate Point Man's physical capabilities.

Michael Becket is the only (SFOD-D) Delta Force character that appeared briefly in F.E.A.R. 3, while the status of other Delta Force units remains unknown.

There are failed test subjects that did not survive the same medical/surgical operation that was done to Michael Becket . Some of the surgical patients belonging to the Delta Force squad code-named "Dark Signal" have perished during the surgery. Many patients, as seen in the Harbinger Facility have died or became failed prototypes known as the Abominations.

In the F.E.A.R. Extraction Point expansion pack, unit operator Douglas Holiday mentions that he has made contact with scattered groups of Delta Force survivors in the city. Accompanied by F.E.A.R. Technical Officer Jin Sun-Kwon and Point Man, they are tasked to rendezvous with remaining units of SFOD-D scattered by the explosion. Unfortunately, several operators perish via various means. Corpses of Delta Force operators can be found in Auburn Memorial Hospital area, which was supposed to serve as their extraction point.

In the parking garage, three operators can be seen battling a REV8 Leviathan. One of them, armed with a MOD-3 Multi-Rocket Launcher, somehow manages to set off a massive explosion, destroying the Leviathan but also killing themselves in the process. In Auburn Memorial Hospital, an operator is violently dragged into the ceiling and torn to pieces by one of Alma's shadow creatures. Finally on the Hospital rooftop, a UH-60 Blackhawk helicopter with Delta operators attempting to extract the Point Man gets destroyed before he can reach it.

In F.E.A.R. Perseus Mandate, the Sergeant receives assistance from several SFOD-D operators early in the game. However, while not given scripted deaths like the operators in F.E.A.R. and Extraction Point, the operators are often quickly slain by Replicas, Nightcrawlers, or occasionally, ATC security guards. They later appear injured and held up in a server room after being heavily outgunned by Nightcrawler mercenaries. While the Sergeant leads a diversion, F.E.A.R. operatives are able to extract them from the facility.

Delta Force has shown the ability to combat Replica Forces. In Interval-03, the Sergeant is tasked to storm the ATC Bio-research facility with SFOD-D operators, it is possible to not have a single Delta Force member killed.

No more Delta Force teams are encountered after Interval 03, where the Origin facility explosion took place, there are not many dead SFOD-D operators seen as well, unlike Extraction Point. After the Nightcrawler Commander is defeated by the Sergeant, a Delta Force UH-60 Blackhawk helicopter is sent to extract him and Captain Raynes out of Fairport, along with Alma's DNA.

A group of Delta Force operatives.

A Delta Force operative being hunted by Alma Wade

A Delta Force operative inside of a helicopter
Español Русский
Community content is available under CC-BY-SA unless otherwise noted.
Advertisement