"Don't touch me! Stay away from me!"
—Griffin, while shooting at Alma and falling back

Cedric Griffin is a Delta Force Operative and commander of Dark Signal who works alongside Michael Becket in F.E.A.R. 2: Project Origin. During the course of the game, it is revealed that Griffin possesses telepathic powers, and had been part of a secret experiment known as Project Harbinger when he was a child. He is voiced by Phil LaMarr.

Griffin is part of a team sent to take Armacham Technology Corporation president Genevieve Aristide into custody just before an explosion that rips apart the city. Griffin is captured by Aristide's guards, and is taken to the Harbinger Facility to undergo a surgery designed to enhance his reflexes.

When Becket is in the abandoned Harbinger Facility, he discovers a communication system, Griffin and Keira Stokes frequently use this to coordinate with each other. Becket soon learns from Snake Fist that they need escape from the facility. Both Delta teammates escape the facility and reach the surface with the help of Griffin. Like James Fox, Griffin reports hearing a woman crying and attempts to find the mysterious woman, he then tries to help the woman to no success. Upon making contact with her, he mentions over the radio that something is wrong.

Realizing that the woman (who is Alma) was hostile, Griffin fires his Patten PK470 Assault Rifle upon her, who then brutally attacks him. Orders are sent out to the remainder of the Dark Signal squad to rush to Griffin's aid, however, by the time his teammates arrive, Griffin is once again attacked by the Alma. He fires upon her, but she tears him apart with her tentacles, liquefying him in the process. As he dies, he pleads with Stokes and Becket to flee from the woman and save themselves. 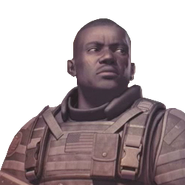 Griffin in the APC with his teammates.

Griffin's ID in-game
Add a photo to this gallery
Retrieved from "https://fear.fandom.com/wiki/Cedric_Griffin?oldid=44225"
Community content is available under CC-BY-SA unless otherwise noted.