The Armored Truck is basically an APC that Armacham Technology Corporation purchased en mass for the Perseus project. Following the second Synchronicity Event, Replica forces break out of the Perseus Compound with an unknown number of these armored trucks, which they use throughout F.E.A.R. as their primary means of ground transportation.

Armored Trucks make many appearances throughout F.E.A.R., sometimes blocking off certain pathways or even dropping off Replica soldiers in combat situations. Dark blue in color, they are completely armored on all sides and sport bullet-proof, ballistic windshields, making them completely indestructible by conventional means in-game. On one occasion, in the industrial compound, an Armored Truck charges the Point Man through an alleyway at high speed. If the player does not move out of the way quickly enough, it will run the Point Man down, instantly killing him. Assuming the player is able to dodge the truck, it is unable to stop before smashing through a fence and plummeting ten stories to the ground, exploding on contact.

The Armored Truck is now more like the Replica IFV, and is similar to the truck seen in the original F.E.A.R. game. The new design is far more durable for urban warfare and more than likely able to hold its own against IEDs, such as the Dark Signal APC. It possesses a rapid fire machine gun turret on its top, able to flank an unsuspecting player. The player sees one in the level "Top," where it drives up and attempts to mow down Keira Stokes. However, Michael Becket is able to destroy its turret. Afterwards, the APC deploys a few Replica troops, and remains parked in the parking lot after Becket leaves the area. Although the Armored Truck is indestructible, it poses no threat after it loses its turret and the Replica soldiers inside it. The turret mounted on the Armored Truck is only used once by the enemy throughout the game.

Armored Trucks also appear in F.E.A.R.: Extraction Point and F.E.A.R.: Perseus Mandate, where they cannot harm the player, with the one exception being the death of Gavin Morrison in the supply tunnels to the Perseus Compound. When Alma Wade tosses the truck at Morrison, if the player rushes towards him, the truck will kill both Morrison and the Sergeant. 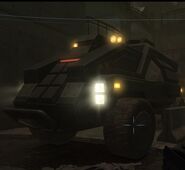 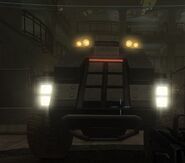 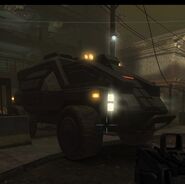 Front left angle.
Add a photo to this gallery

Retrieved from "https://fear.fandom.com/wiki/Armored_Truck?oldid=44497"
Community content is available under CC-BY-SA unless otherwise noted.