Armacham Technology Corporation (sometimes shortened to ATC) is a company heavily featured in the F.E.A.R. series. They are the primary antagonists of the series, as they are ultimately responsible for Alma Wade's hostility and the subsequent disastrous results, and for the creation of the Replica Forces.

ATC has been in operation since 1964, according to a news report in F.E.A.R.: First Encounter Assault Recon. A multi-national conglomerate, ATC prides itself on being on the cutting edge of technology, with research and development occurring primarily for military applications, including aerospace. Within their headquarters, a number of pictures of unconventional aircraft can be seen hung on walls; these include what appears to be a large, two-seat version of an F-22 Raptor with an extended nose flying in formation with a standard F-22 fighter jet, inferring that the company likely works on joint ventures with companies such as Boeing and other military contractors such as Lockheed Martin.

Other projects are a huge compound helicopter using rocket boosters, and a space shuttle design similar to the various SSTO spaceplane proposals of the 80s and 90s, such as HOTOL and the X-30 and X-33. They have had military contracts with the United States military since the 1970s, starting with the Icarus project, as well as making smaller computers for infantry used missiles. The corporation also sells high-tech spy satellites, such as its newest version of the Hannibal series, the Hannibal-3 spy satellite.

They have highly-efficient nuclear reactors, working cryogenic suspension technology, cloning technology, and can be extremely unethical with regards to their methods. ATC is interested in the water contamination in the Auburn District due to one of their experiments causing it, sickening the people in the immediate vicinity of the Origin Facility.

Throughout F.E.A.R., the Point Man encounters several of ATC's high-tech designs. Auto-defense gun equipped with heavy machine guns line the ceilings of Armacham's closely-guarded floors, powered armor exoskeletons under Paxton Fettel's control wreak havoc with impunity and shrug off anything weaker than explosive or high-caliber weapons, and Laser-Armed compact UAVs flit in and about the floors checking for intruders.

They have a small army of heavily armed security guards known as the Armacham Technology Corporation security guards, but they are poorly trained and are easily dispatched when up against Replica troops, due to the superhuman abilities of the Replicas. Some security forces travel around in Ford Crown Victoria interceptors and Chevy pick-up trucks that are unarmored.

In F.E.A.R. 2: Project Origin, ATC is divided into two factions. One faction is controlled by the Board of Directors, and the other by Genevieve Aristide. The Board of Directors control the majority of the global ATC, for example, the ATC Black Ops. Genevieve Aristide controls the remnants of the local ATC in Fairport, including Terry Halford, Dr. York, and the rest of the ATC personnel in the Harbinger Facility.

The Board of Directors sends ATC Black Ops under Colonel Richard Vanek to arrest Genevieve, but they fail due to Michael Becket killing Vanek and most of the Black Ops personnel. Genevieve tries to contain Alma Wade by using Becket as a beacon, so he can lure her into the telesthetic amplifier at the Still Island nuclear power plant. With the release of F.E.A.R. 3, it appears that the plan was a failure.

With Colonel Richard Vanek dead and the majority of the Armacham Black Ops stationed in Fairport scattered, the corporation sends more mercenaries to finish the same task: eliminating all evidence that connects it to the recent events in the city. This includes aggressive and disciplined soldiers that intelligently utilize cover to search for and ambush their target. They coordinate with other squad members to provide suppressing fire, execute flanking maneuvers, and to patrol and search areas.

The Armacham Bio-Research Facility and the Armacham Perseus facility, as well as various other Armacham buildings, are infiltrated by the secondary F.E.A.R. team in F.E.A.R.: Perseus Mandate.

ATC is most well known in the F.E.A.R. series for the large amount of unethical experiments performed in the name of financially bolstering the company.

The first of the known projects performed by ATC was Project Icarus, which was started in 1973 with the goal of helping maintain bone density in astronauts during extended trips into space. The subjects were strapped down for months at a time and kept alive on a liquid diet to help them to lose muscle mass and bone density. Despite ATC's best efforts, a solution could not be found, so Replica candidates were operated on, with the goal to remove their bones and replace them with a lightweight material that could not decay. Not only were the operations successful in negating structural decay, it also granted the subjects speed and agility never before seen. However, the project was deemed too expensive, and was shut down.

Though not fully operational until after the catastrophe of the Origin experiment, Project Paragon was first introduced in 1982, when it was used to test the psionic powers of 3 year old Alma Wade.[1] After that, the project would not be used again until it became clear that Alma could not be controlled, and that other subjects with similar powers were needed. At that time, the main goal of Paragon became to find children gifted with unnatural powers. Children who already had some form of powers were tested for strength, while those who did not were given drugs in an effort to create abilities. Project Paragon was still ongoing at the time of events in F.E.A.R.

The most well recognized of ATC's experiments is Project Origin, which was tailored to the violent personality of Alma Wade. By the age of 6, ATC realized that Alma was far too dangerous to continue to be worked with, and that her steady stream of psychic attacks on ATC employees was only going to worsen. To this end, ATC had Alma put into an induced coma two days before her eighth birthday, so that she could no longer fight back against their experimentation of her. When Alma was 14, she was impregnated with the first of two prototypes, which she gave birth to at the age of 15. She was immediately impregnated again, and gave birth a second time at 16.[2] Project Origin was officially shut down in 2005, when the second prototype went rogue and killed several Origin staffers in retaliation for his mother's mistreatment. The prototype was contained and Alma was killed by removing her life support, while the facility her body was stored in was shut down.

Project Perseus began as a way to hone the psionic powers of Paxton Fettel, the second of Alma's two sons. Replica soldiers were created specifically to follow the psychic orders of Fettel. Perseus was still ongoing at the time of F.E.A.R., and the Perseus Compound is where 30 year old Fettel goes rogue after engaging in a second Synchronicity Event with his deceased mother.

Project Harbinger was created with the goal of obtaining psychic commanders without requiring Alma to bear a pregnancy. Test subjects were attuned to Alma's psychic signature, however, this caused the subjects to quickly slip into insane rages powered by Alma's hatred of ATC. These subjects became what is known as Abominations, inhuman creatures covered in scars and bandages, barely able to control their own minds.

Besides just their official office buildings, Armacham owns a good many secret locations. The most public of these places is Wade Elementary School, named after top ATC scientist Harlan Wade. While on the outside a normal school, underneath the main building is a research facility, where children were taken for experimentation. Other secret locations include the Perseus Compound, the Origin Facility and a birthing facility, where Alma was taken to give birth to the prototypes. 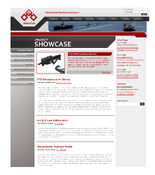 Front page of ATC's site.
Add a photo to this gallery
Retrieved from "https://fear.fandom.com/wiki/Armacham_Technology_Corporation?oldid=40589"
Community content is available under CC-BY-SA unless otherwise noted.