The Armacham Data and Research Center is an Armacham Technology Corporation-owned facility that appears in F.E.A.R.: Perseus Mandate. The Data Center is where important documents are kept, including evidence regarding the top secret Project Origin.

The Data and Research Center is the site of an ambush by Nightcrawlers on a team of Delta Force soldiers. The second F.E.A.R. team infiltrates the site, only to discover that the facility has become a graveyard for the corpses of murdered employees, killed to stop the truth of Project Origin from becoming public.

The facility is destroyed hours after the Sergeant leaves it by the explosion of the Origin Facility.

Gavin Morrison interrogates Bristol in the Data and Research Center. 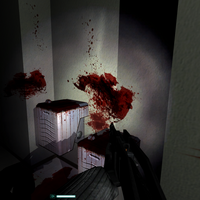 Bloody drinking fountains in the building. Care for a drink?

Controling a turret in the Data Center.

Alma holding two Nightcrawlers up by their throats. 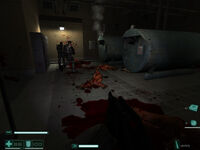 Chen and Raynes in the maintenance area of the building.

Concept art of the data storage servers.
Add a photo to this gallery
Retrieved from "https://fear.fandom.com/wiki/Armacham_Data_and_Research_Center?oldid=39946"
Community content is available under CC-BY-SA unless otherwise noted.