The Armacham Bio-Research Facility is a non-canon location seen only in F.E.A.R. Perseus Mandate. The facility is located in the fictional city of Fairport, presumably outside of the Auburn District.

The Bio-Research Facility is where samples of Paxton Fettel's DNA is stored, in case Armacham Technology Corporation should ever have the need of his blood for experimentation purposes. This facility is heavily fortified by Armacham's private forces, although the Nightcrawlers make quick work of them.

After being escorted via UH-60 Blackhawk Helicopter from the Armacham Data and Research Center, they try to land near a parking garage but a REV6 Powered Armor deters them from doing so and they barely manage to escape. After finding a better landing zone, it is clear that the area is a warzone as explosions constantly rock the torn areas. Delta Force operatives, Replica forces, Armacham Security Guards, and even the Nightcrawlers are all fighting against one another. Some of the most powerful enemies in game are found here also, including REV8 Leviathan and Nightcrawler Elite.

This is where the Sergeant and his team chases Gavin Morrison through the Plaza, where his team barely catches Gavin before witnessing the Origin Facility Explosion and manage to escape separately before the area is obliterated by the disaster. The facility is only seen during Interval 03.

Concept art of the hallways in the Facility.

Concept art of the plaza.
Add a photo to this gallery 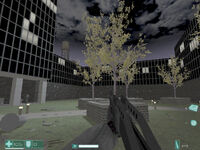 One of the courtyards of the Armacham Bio-Research Facility. 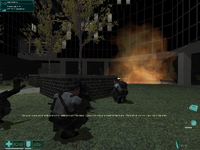 Second FEAR team and Special Delta Force discussing to split themselves to focusing on both objective at the same time.

The Sergeant inside an underground area of the Bio-Research Facility.

A Security Guard has been killed by the Nightcrawlers.

A REV8 crashes through a ceiling in the Facility. 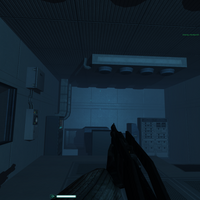 The freezer area of the Facility. 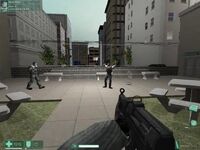 The second F.E.A.R. team surrounds Morrison just before the Origin Explosion occurs.
Add a photo to this gallery
Retrieved from "https://fear.fandom.com/wiki/Armacham_Bio-Research_Facility?oldid=44063"
Community content is available under CC-BY-SA unless otherwise noted.