The Andra FD-99 is a submachine gun featured in F.E.A.R. 2: Project Origin.

The Andra FD-99 is a lightweight, selective fire submachine gun (SMG) that fires from a closed bolt. The short barrel and folding stock make it ideal for close-quarters combat. It is a reliable, easily controlled weapon that fires a low recoil pistol cartridge. Comes equipped with a reflex sight and a high capacity magazine.

Use the Arsenal Selection Interface to toggle between 3-round burst and fully automatic fire.

One of Michael Becket's starting weapons (the other being the Seegert ACM46 Pistol), the FD-99 is the low weapon in terms of power per shot in the entire game, doing roughly half as much damage as the Seegert or Patten PK470 Assault Rifle. This is made up for with a high rate of fire, a large reliable magazine size, ammo capacity, good mobility when held, and high accuracy and low recoil. Its lack of hitting power can be problematic later in the game, as more heavily armored opponents appear more and more frequently.

The FD-99 has an unique function; where the fire mode has been changed to an burst mode in high accuracy. The full auto fire function on the other hand, its accuracy drops off significantly. Its alternate 3-round burst mode improves accuracy in return for less control over fire. It comes with a low-magnification reflex sight which helps somewhat to track targets at longer ranges, though using it doesn't affect accuracy.

The FD-99 is the standard issue weapon for ATC Black Ops Soldiers and is encountered in their hands throughout the game, but becomes less common later on as Replica Soldiers appear more frequently, who are instead equipped with the more potent PK470. However, the FD-99 still has some advantage over PK470 if used properly, and the player should not underestimate it while used by the enemy. It can be fired one-handed, as demonstrated by puppets of Remnants doing so; ATC soldiers are also seen doing so as they retreat if they can see Becket advancing on them. Keira Stokes, Redd Jankowski, Manuel Morales and Harold Keegan all use this weapon. 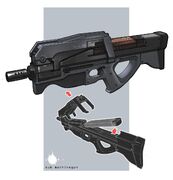 Concept art of the submachinegun.

Render of the SMG.

A reload that hides the magazine feed.

Looking through the reflex sight of FD-99.

FD-99 in the Armacham Field Guide.
Add a photo to this gallery
Retrieved from "https://fear.fandom.com/wiki/Andra_FD-99_Submachine_Gun?oldid=43425"
Community content is available under CC-BY-SA unless otherwise noted.