The Abominations are normal humans implanted with amplifiers and administered chemical agents to aid in the development of psychic abilities, while undergoing telesthetic amplification sessions to become Replica Commanders. However, the invasive process of improving and attuning the subjects' psychic fortitude caused extensive neural damage to the candidates, causing them to regress into a violent animalistic state. Symptoms of early psychological decay within the testing studies were incessant paranoia, hallucinations, nightmares, and loss of logical thought.

Although the developmental stages caused the Abominations to become extremely dangerous and unsuitable for being rational commanders, they were successful in obtaining the psychic capability to fully control Replica Soldiers while in an Amplifier machine, but that ability was useless in its entirety, due to the failed subjects possessing inadequate mental control of their own selves and of the replicated soldiers.

Abominations prove to be dangerous to themselves, as they are sometimes seen with bandages wrapped around their heads, and always have severe wounds and rashes. They are kept in a "holding area" in the Paragon Facility, a prison-like area with several rows of tiny, crude metal cells, equipped with mattresses. Michael Becket is attacked by several throughout the course of F.E.A.R. 2: Project Origin. At several points in the game, they can be seen attacking enemies and brutally slaughtering them, severing their heads and spraying blood. They attack anything in sight, and have no allies.

These monsters are only fought in four levels: Discovery, Withdrawal, Replica and Snake Fist. Most of the time, the player will fight a group of them, except in the level Withdrawal, where only one is fought.

Prior to the player's first encounter with the Replicas, an Abomination can be seen sitting in a Psychic Amplifier as images of death and destruction flash in front of it on television screens. The Abomination is struggling and roaring, either mad with pain or attempting to get loose. After killing an enemy, they often scribble images on the walls or on the floor using their victims' blood, along with the words such as: "Can he see?"

Foxtrot 813 encounters several Abominations in F.E.A.R. 2: Reborn. They are seen in the sewer area, the sewers seem to be infested by Abominations while Reborn takes place. At the last section, where the player fights them in a circular chamber, if they aren't all dispatched before the Remnant spawn is triggered at the bottom of the pit, the player will have to fight both enemies at once. Interestingly, despite belonging to technically different forces, the Remnants and Abominations will not attack each other.

Abominations are prominent throughout the tutorial, and two campaign levels, Fire Storm and Subway Panic. In addition, there appears to be a stronger version which acts as a boss at the end of Subway Panic. There are also larger and muscular mutants that are featured alongside the abominations during the last stages of Fire Storm. Abominations are much weaker and do slightly less damage than their F.E.A.R. 2 counterpart, however, they will attack the player in overwhelming numbers, forcing the players to gang up and take them out together. Beside these, Abominations act similar in F.E.A.R. 2 and Reborn.

Abominations are savage, humanoid cannibals. They often wear hospital pants, but are sometimes naked. When they are not wearing pants, it can be observed that they do not have genitals; this is either for censorship, or they were surgically removed for unknown reasons; possibly because of damage from self mutilation. Their faces are mutilated; this appears to be self mutilation.

The extent of how the project's research negatively affected the Abominations can be observed from their grotesque physical appearance. Some Abominations can be seen to have stitched skulls, where the likely procedure of neural implant surgery was performed on their brains. Several white circular markings are located along the bodies of the test subjects, where diode devices to assist in psychic activity are to be located internally, and are able to be easily connected to other supportive systems, such as a T.A.C. chair. The Abominations are the frightening aftermath of inhumane attempts to excel a human's brain and body to supernatural lengths, ultimately destroying the sanity of the individual in return for power.

They are most likely related to the Failed Test Subjects seen throughout the Harbinger Facility.

Abominations are lethally quick and have the ability to run on walls, coupled with quick hit-and-run melee attacks that deal a great amount of damage. Thus, they share very similar abilities to that of Replica Assassins. Unlike the Assassins, however, they cannot become invisible and they can grab hold of Becket. In the latter scenario, only repeated meleeing will shake them off. The sounds they make are animal-like and will alert the player to their presence. 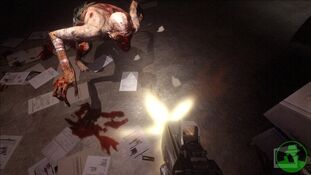 In combat with an Abomination. 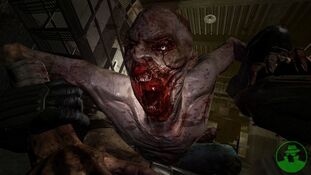 Up close and personal. 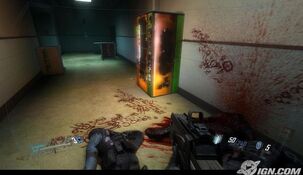 Drawings made by an Abomination. 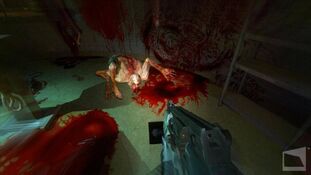 An Abomination prepares to jump at Becket. 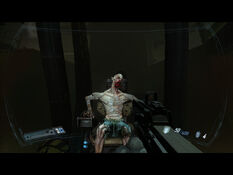 An Abomination strapped to a chair.
Add a photo to this gallery
Retrieved from "https://fear.fandom.com/wiki/Abomination?oldid=44138"
Community content is available under CC-BY-SA unless otherwise noted.